This outdoor living remodeling project included the reworking of an existing open-air structure, as well as the design of a new pool and accompanying deck that transformed the backyard just behind the home. The new structure extends further out, providing space for a new outdoor kitchen and ample space for a seating area around a new fireplace. 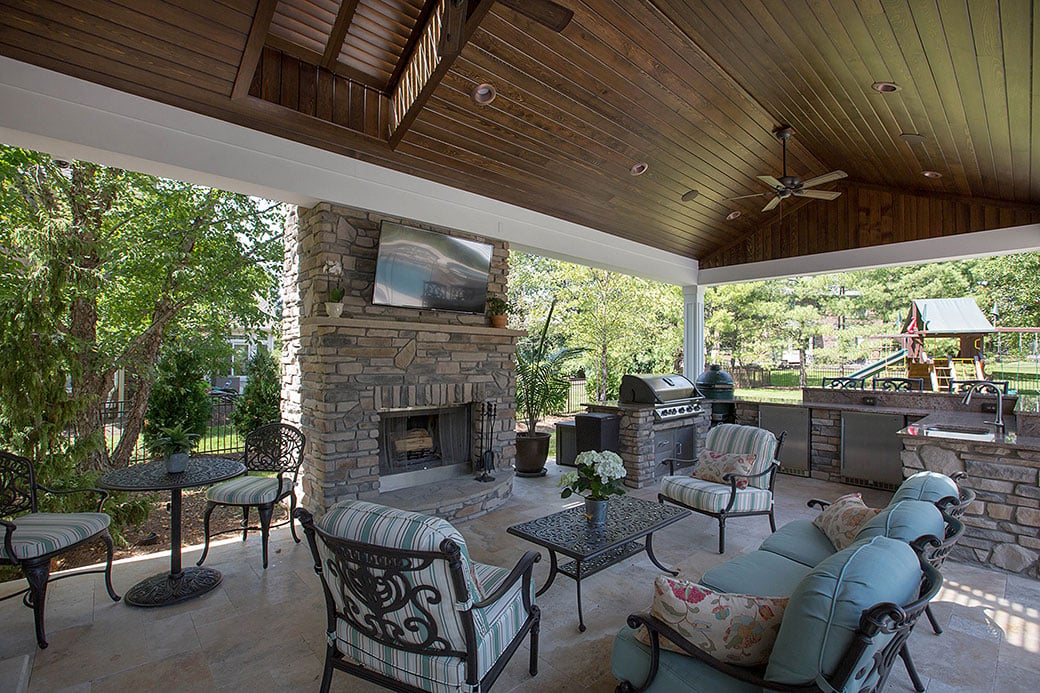 The project goals centered around the homeowners’ desire for a more useful and accommodating outdoor living space. They sought to have a useful space with a well-appointed grill area, and for the new structure to be an extension of the home. To match the style of the home, the homeowners’ sought a casual English-style garden feel, with classic details.

The first challenge brought on this project was in creating a design that utilized the existing screened room, while turning it into something new. To achieve the homeowners’ desire for an accommodating space, the structure was extended several feet off the end. The walls were removed to create an open feeling between the space under the roof and that outside of it, removing any barriers, and visually increasing the functional space.

Another challenge of this project came through the coordination of the various installs. The pool, patio and structure were all handled independently in the construction phase. One obstacle that occurred with this arrangement was an error in the pool installation, in which the pool was set higher than anticipated. In the field, changes were made to the design of the patio to seamlessly integrate this difference. The grade change was placed at the end of the new walkway to the driveway, where a step down was included. 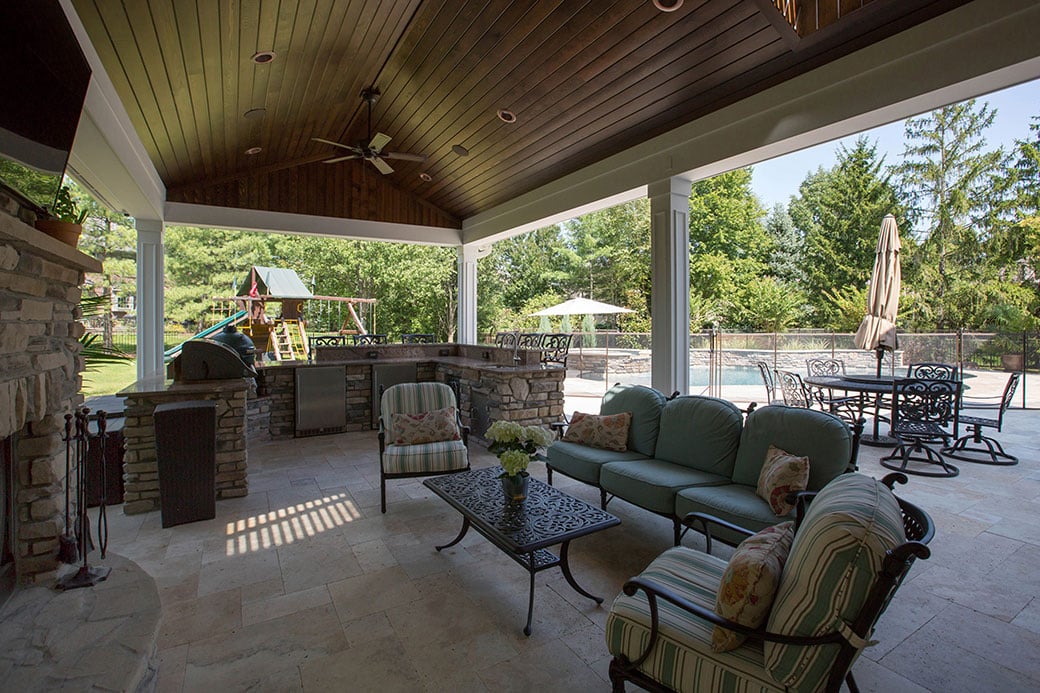 The existing structure included two support columns at the end away from the home. The two columns were kept in place. This also allowed the headers, spanning the distance from the house, to remain in place. From there, the structure was extended another 15’ out to a new pair of columns and new headers. At the house, two decorative columns were also installed.

One of the existing columns was embedded in the new stone fireplace. The fireplace helps create a seating area, and defines a new visual mid-point in the space. The entire structure retained the same vaulting through the new length that was existing in the original. Skylights in the existing roof were also kept for added natural lighting in the back portion of the new structure. The back door of the home, leading into the covered space, was replaced and new stairs were added. 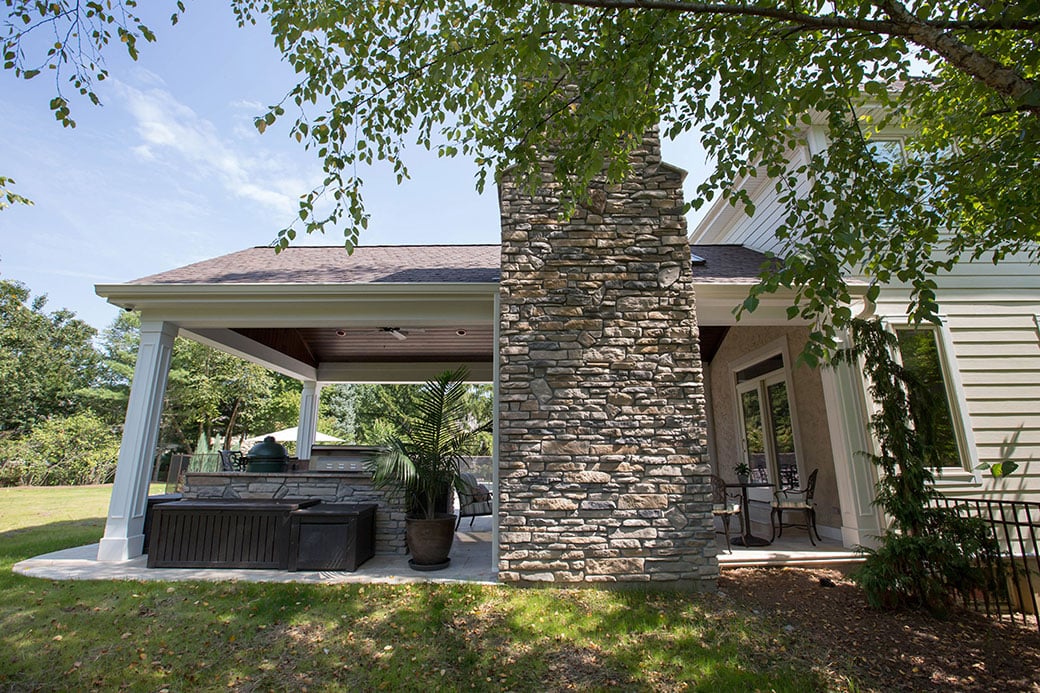 The fireplace is a classic design with accommodations for a new TV. Over the wood-burning insert, the facade of the fireplace steps back 6”, bringing the mounted TV back out of the direct line of heat from the fire below. On the chimney, on the outside of the structure, the chimney profile narrows. The angled steps in are covered with hearthstone for a traditional look. The fireplace is faced with cultured stone veneer. The stone at the round hearth is installed in a broken pattern. The round hearth creates an easier flow around the fireplace by removing potentially troublesome, low corners.

The outdoor kitchen takes up the majority of the space in the new portion of the structure. The U-shaped layout has the effect of turning the kitchen into a destination outside. It also functionally allows for the inclusion of several elements. The kitchen contains a sink, trash can cabinet, two 24” under-counter refrigerators, a large egg smoker, and a 42” gas grill with storage cabinet below. The facade of the counter support is finished with cultured stone, matching the fireplace. The counter is granite. There is a second tier counter around one corner, providing bar-height seating on two sides just inside the covered structure. An opening in the stone was created to provide access to the base of the egg smoker.

The patio and the floor of the structure are level with each other, so that the two spaces are integrated. Travertine was used for the entire patio. The patio edge is organically curved, in keeping with the English traditional style of the remodel. The pool is also organically shaped. A circular spa was included that features a waterfall into the pool. The position of the pool and spa was determined based on the angle of view from both the home and the new structure, maximizing where the waterfall could be seen and enjoyed. The patio extends along the back of the house, forming a walkway that connects to the existing hardscape at the side driveway. 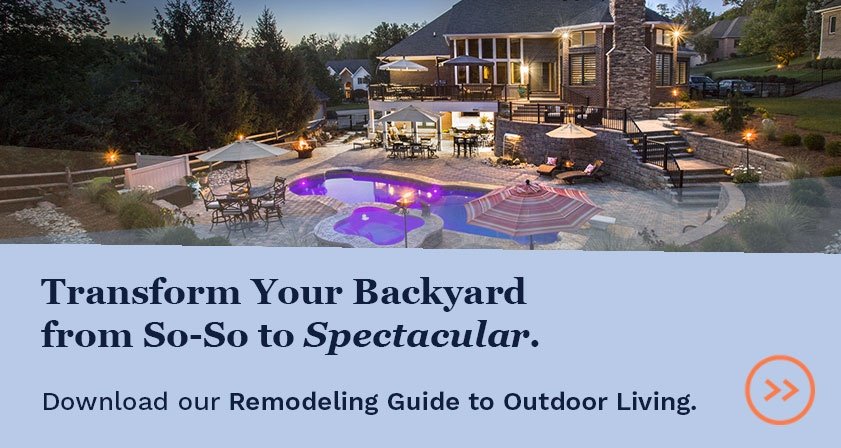