Hallway bathrooms used for residents and guests can sometimes pose unique challenges. Those with many areas and doors can lead to confusion about what guests have access to or how the space is shared. To solve this issue for this Maineville project, Lead Designer Jodi Smith suggested an uncommon solution- turn the single bathroom into two separate bathrooms. The result? Two new spaces that speak to the specific needs of each so that everyone is a bit more comfortable.

The new guest bathroom.
“The existing Jack and Jill bathroom had too many doors,” Smith explained. There were doors from a bedroom and the hallway along with doors for the inner room where the tub and commode were. There was also a door for a tiny linen closet. In the small space, this cluttered up the room and added to the confusion on which door went where. On top of this poor layout, the bathroom also lacked style and interest. 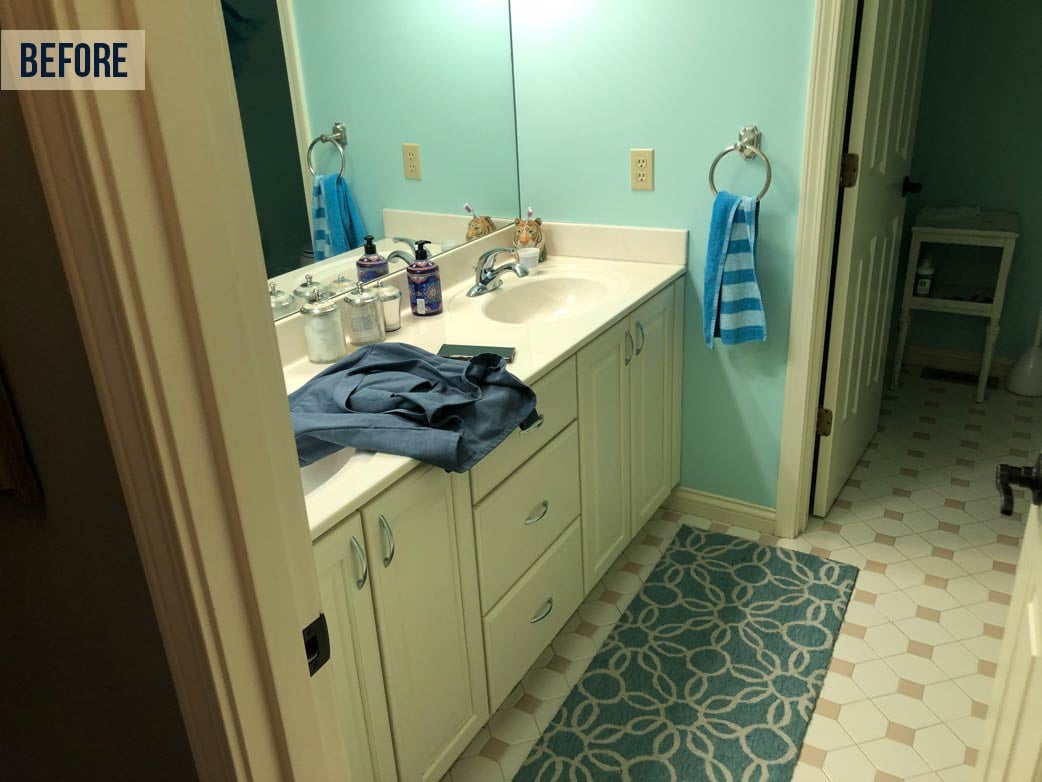 Original bathroom from the hallway door.
Smith provided a few different options for a new layout, but the option to create two new bathrooms solved the issues best for the homeowner. “The end-users had to be taken into consideration,” Smith stated. This option also provided the homeowner with the opportunity to have the dedicated guest bath she dreamed of. Likewise, the daughter was able to have a bathroom of her own that could be more tailored to her style. 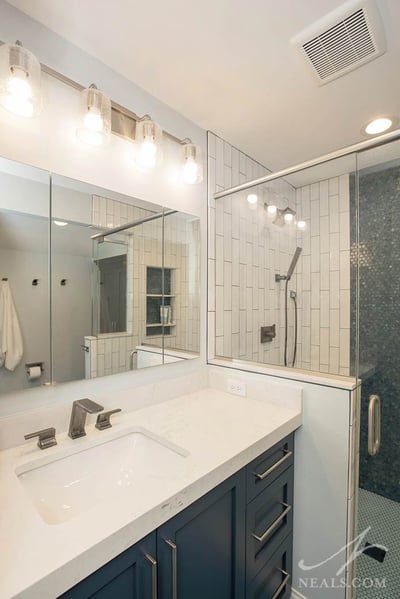 Daughter's new private bathroom.
In the daughter’s bathroom, the design solution was clear, Smith recalled. “She wanted very bright blues in her bathroom, and she loves sparkle." Smith's goal was to address the daughter's preference but also match what the homeowner wanted the space to look and feel like in the end. Smith knew that there was a fine line here, so she used fun tile selections to capture the right feeling. The finished design is a playful blue and white scheme that feels ageless and welcoming. 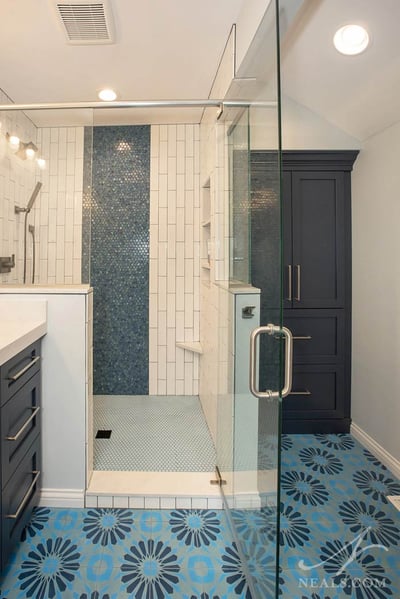 Daughter's bathroom with new shower and linen storage
In order for the daughter's bathroom to have enough space, Smith took some from the unfinished attic space next door. This brought a few more inches into the bathroom to make enough room for everything. “That helped make the space feel less cramped,” she said. This change meant the new linen cabinet would need to go under the angled ceiling. To make this less awkward, Lead Carpenter Jim Rebholz and the field team used drywall to make the new linen cabinet appear to be a built-in. 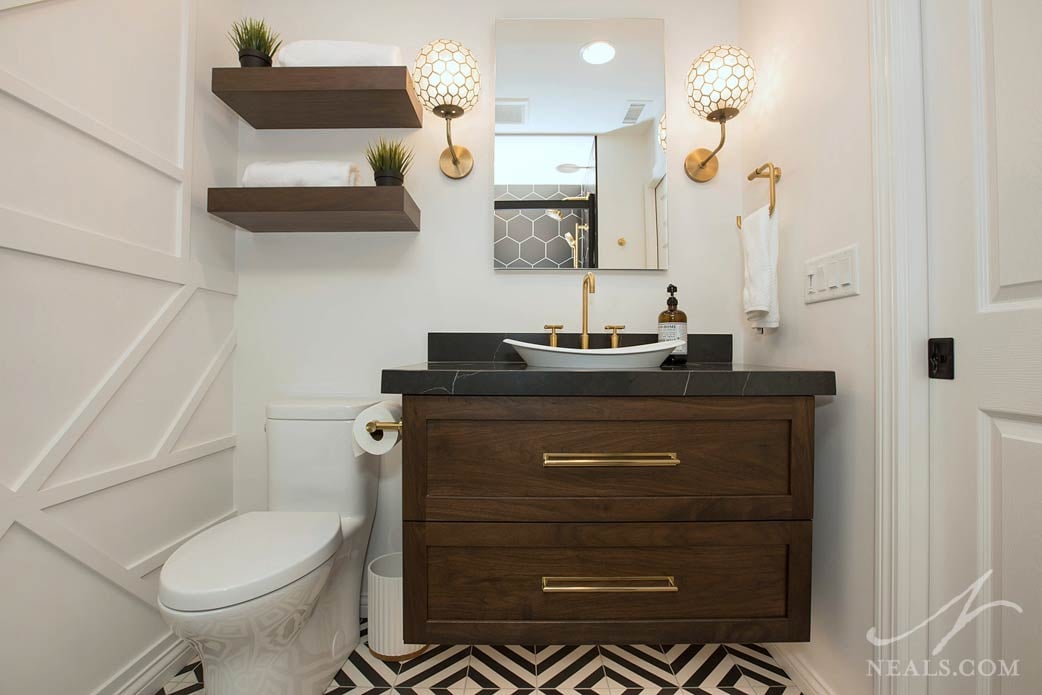 New guest bathroom with a pocket door to the hallway.
For the new guest bathroom, Smith looked for ways to capture the homeowner’s desire for a hotel vibe. “Something very clean and sleek,” she clarified. Smith started with a palette of black and white, then looked for ways to add interest and depth. This included walnut cabinetry, graphic floor tile, and brushed brass finishes for the fixtures. To take it even further, Smith saw the back wall of the room as an opportunity to create interest and even a little art.

Guest bathroom shower and feature wall.
“I really enjoyed working on the wall and love how it turned out,” Rebholz said about the project. Smith designed the pattern, then handed the plan over to Rebholz who fit the MDF pieces into place on site. This extra detail elevates the boutique feeling of space, making it feel put together.
This wasn’t the only fun custom element to the project. Rebholz also pointed to a door outside the bathroom. “The door to the unfinished storage area needed to be relocated as part of the design changes.” The new location wasn’t ideal so the homeowner asked about ways to hide the door. The solution? A custom bookcase door. 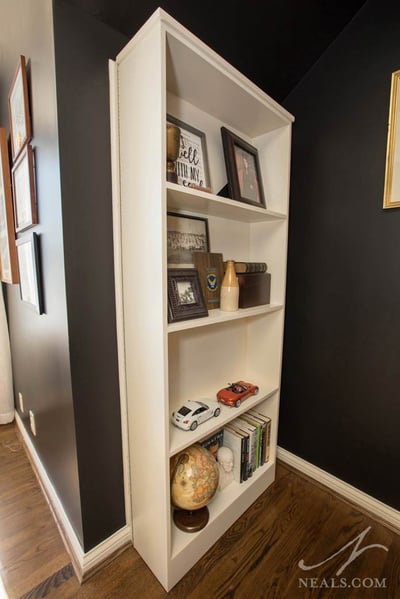 Bookcase door that provides attic access in the study.
Smith explains the success of this project well. “It was a great collaboration. The homeowner trusted me, but she also had ideas and input! Then our field crew executed my ideas superbly.” This fostered everyone's desire to go those extra steps to bring the whole thing together. The new small bathrooms are as complete as possible, and function and feel much better for everyone.
To see more photos from the full project, view the slideshow.
Ready to customize the function and style of your bathroom? Contact us to get started.