A large basement is a great asset for any home. The additional square footage for living space and storage off the main floor really can't be beat. Without a plan, however, basements can quickly become cluttered, disjointed, and unusable. Reclaiming the basement was the goal of this Western Hills family, who were looking for a place that could better accommodate their growing family and be a comfortable space for friends and family to spend time. 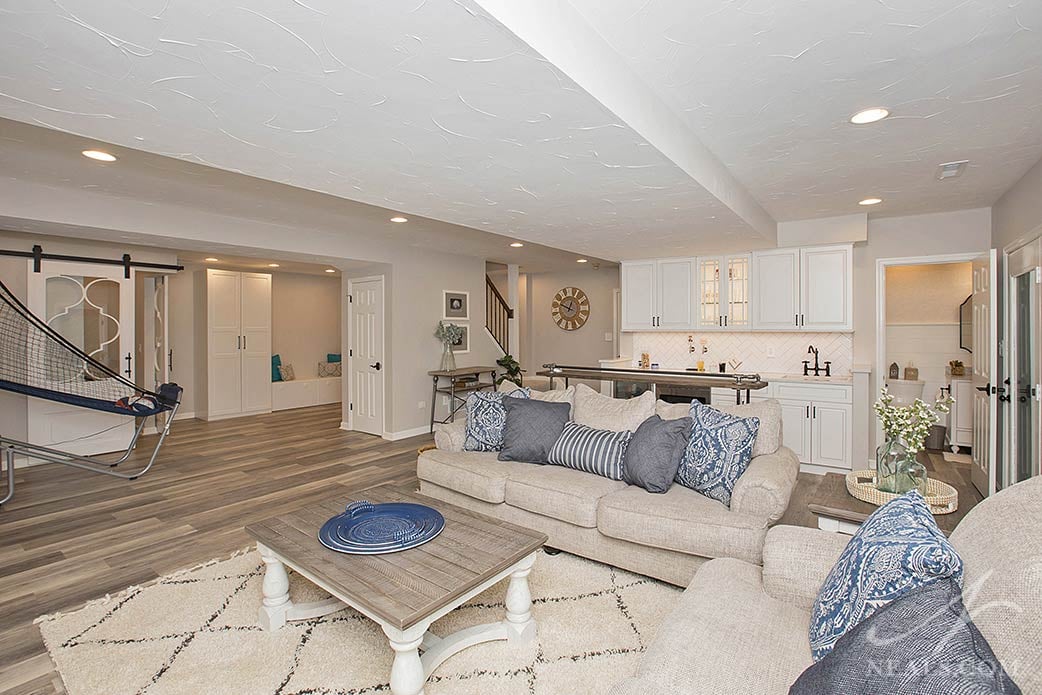 The original basement design divided the space up into two long rooms. The secondary storage room, which had been partially set up as a kid's playroom, was accessible through a single door several feet away from the stairwell. The entire space, with the typical low ceilings of a finished basement, was improperly lit, making it feel like a dark space that no one in the family could really enjoy. A tiny sink and cabinet in a far corner and a guest bath with no panache offered hints of potential, but were far from ideal. 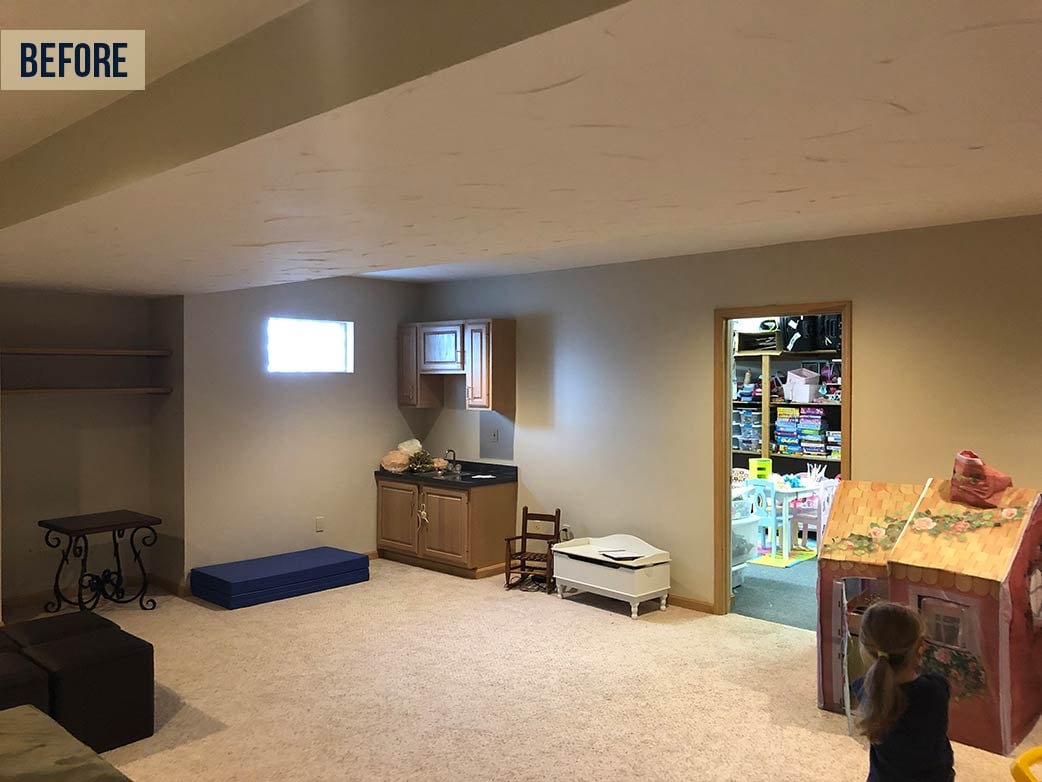 Neal's Designer Christina Temple worked with the family to create a new open floor plan that would correct three main issues. First, the basement's layout would be improved to create better flow and accessibility to the entire space. Second, the lighting would be improved along with the introduction of actual style elements to improved the aesthetics of the basement and make it feel more like a part of the home. Finally, the function of the space would be improved by adding new features that fulfilled the lower level's potential. Small but important changes, such as opening up the stairwell and adding trim details to existing doors to make them work with the new design, all played a role in creating a polished space. 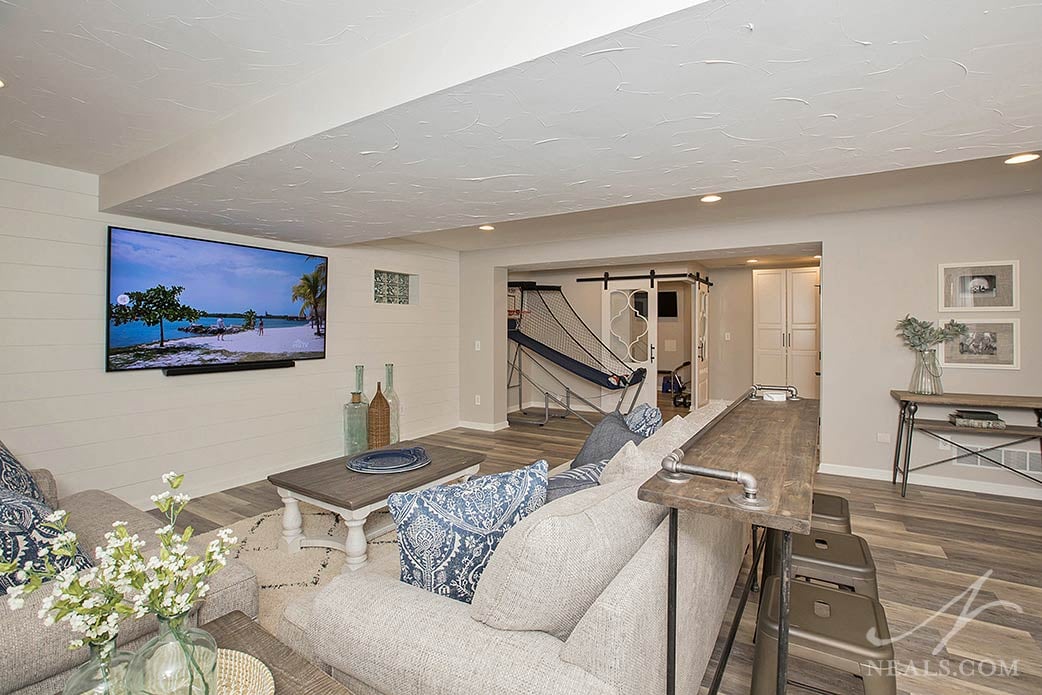 The main area of the basement was opened up and unified with new luxury vinyl tile (a trending flooring option with more versatility and style options than traditional hardwood), and forms a full circular path, connecting the two large spaces, one at the stairs and the other through a wide doorway. This arrangement allowed the space to be configured into the zones. The main living space near the walkout glass door, the gym, and the new playroom just off the stairs. The flooring and gray/white color scheme creates a cohesion throughout the spaces. 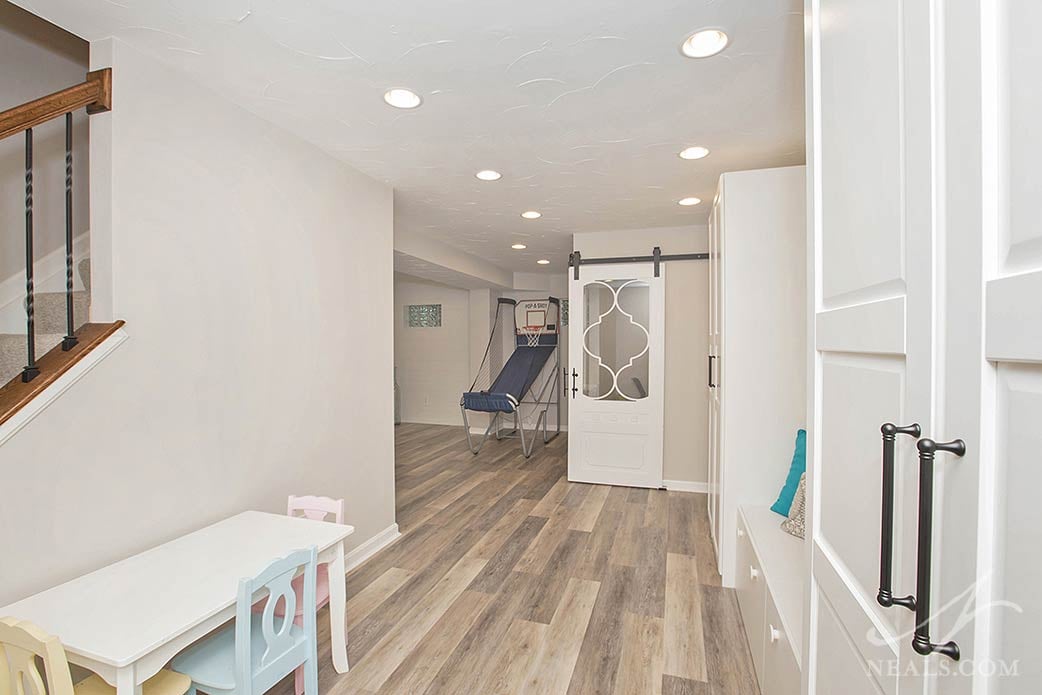 A storage solution was added to the new playroom to create an organized space directly off the stairs (which were opened to both sides of the basement). The new play space is a clutter-free and comfortable spot for the whole family and toys and games are easily accessible for the kids. A bench in this area is an added touch of comfort for the adults and children.

Ditching the tiny corner wet bar, Temple took advantage of an empty wall near the bathroom and designed a new traditional farmhouse style wet bar. With the added space, a beverage fridge, microwave drawer and ample cabinetry could also be included, increasing the basement's comfort and utility. Since the bar was now adjacent to existing mechanical space, taps could be installed as well- a nice touch for when the adults have company over. 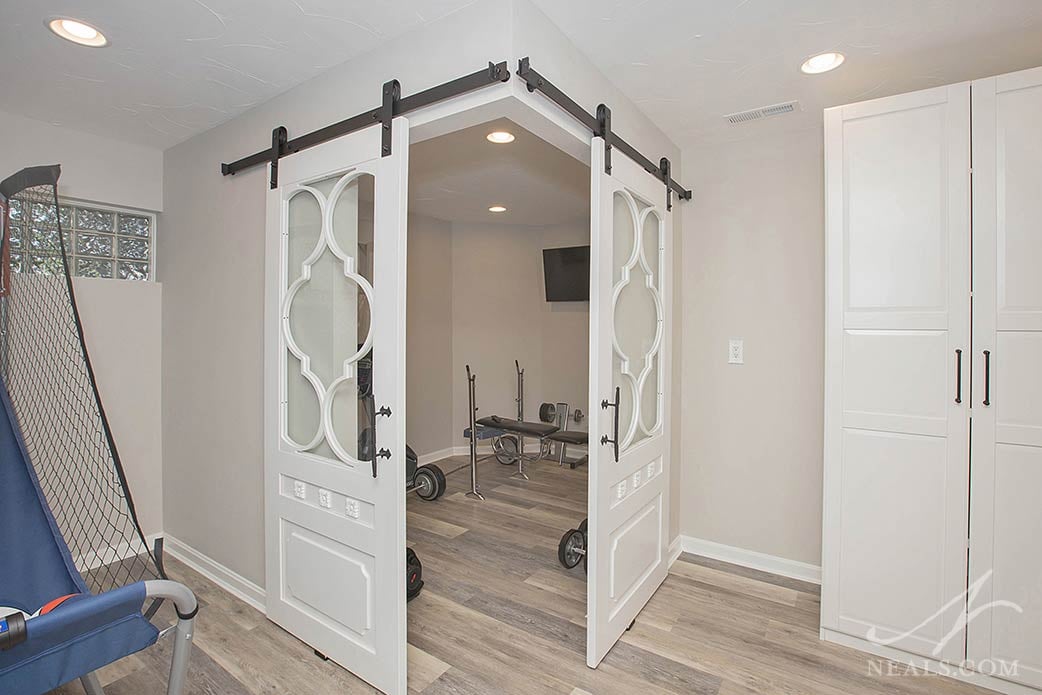 This remodel was achieved in a manner that maximized the existing footprint of the space. An extra section of space below the main floor's bay windows created a pocket just the right size for a home gym. In order to add some privacy to the space but not get in the way of the room's openness and flow, the gym door was situated as a corner opening. New traditional style sliding doors were attached to barn door rails for a custom look that bolsters the basement's new design style. 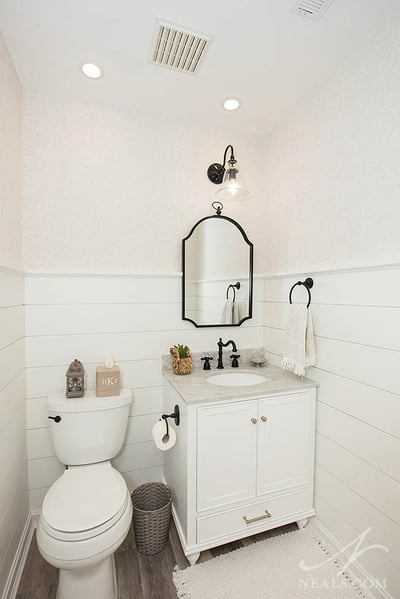 Not to be left out, the guest bathroom was included in the room's design scheme, and matches the rest of the space. Here, the traditional vanity cabinet is designed to look like an old piece of furniture, suitable for the farmhouse style of the overall space. Black fixtures in a Victorian-inspired style add some needed contrast against all the light colors. 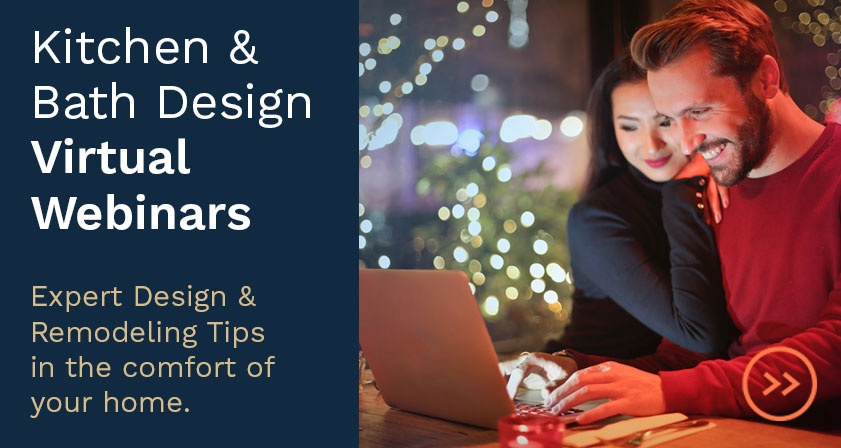