Several neighborhoods throughout Cincinnati are filled with historic homes needing modern updates. These types of projects are always interesting, often revealing the history or quirks of the home and involving logistics that are unique to historic home communities. The pair of bathroom remodels in this Newport home provide examples of how modern design sensibilities and an eye for what's appropriate for the home can meld into new, enjoyable spaces. 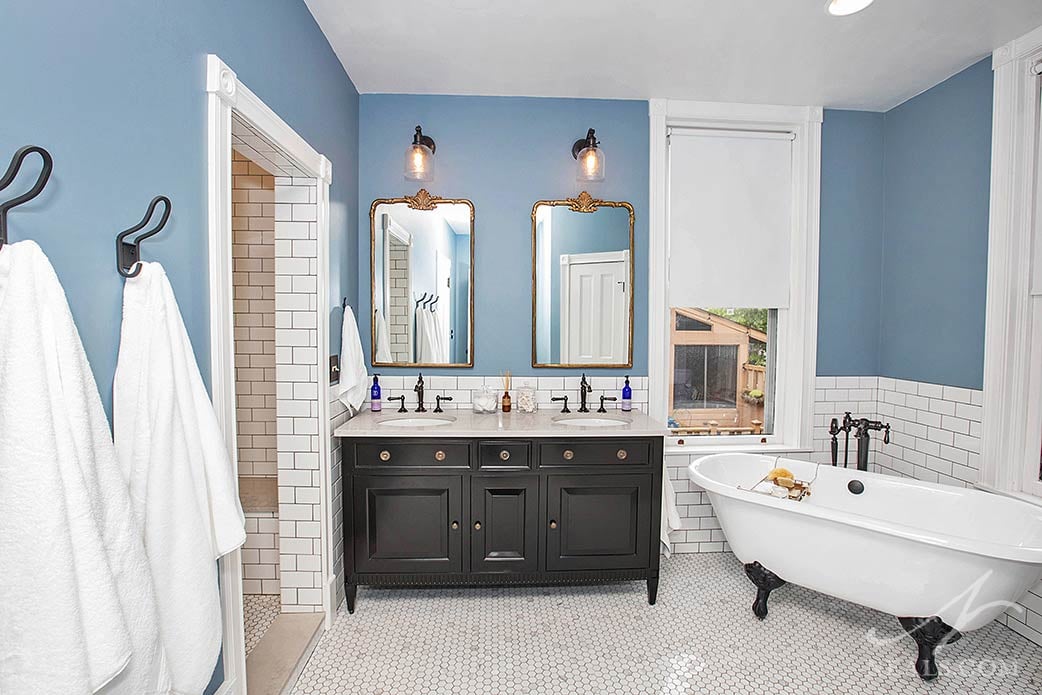 The goal of the project was to create updated bathrooms with practical considerations for the homeowners' needs with appropriateness for the style and history of the home. While the homeowner's personal style tends toward minimal Scandinavian-influenced design, the age of the home called for more traditional design. The middle ground was to use modern solutions to create spaces with hints of the 19th Century. Click here to see the full before and after gallery of this project. 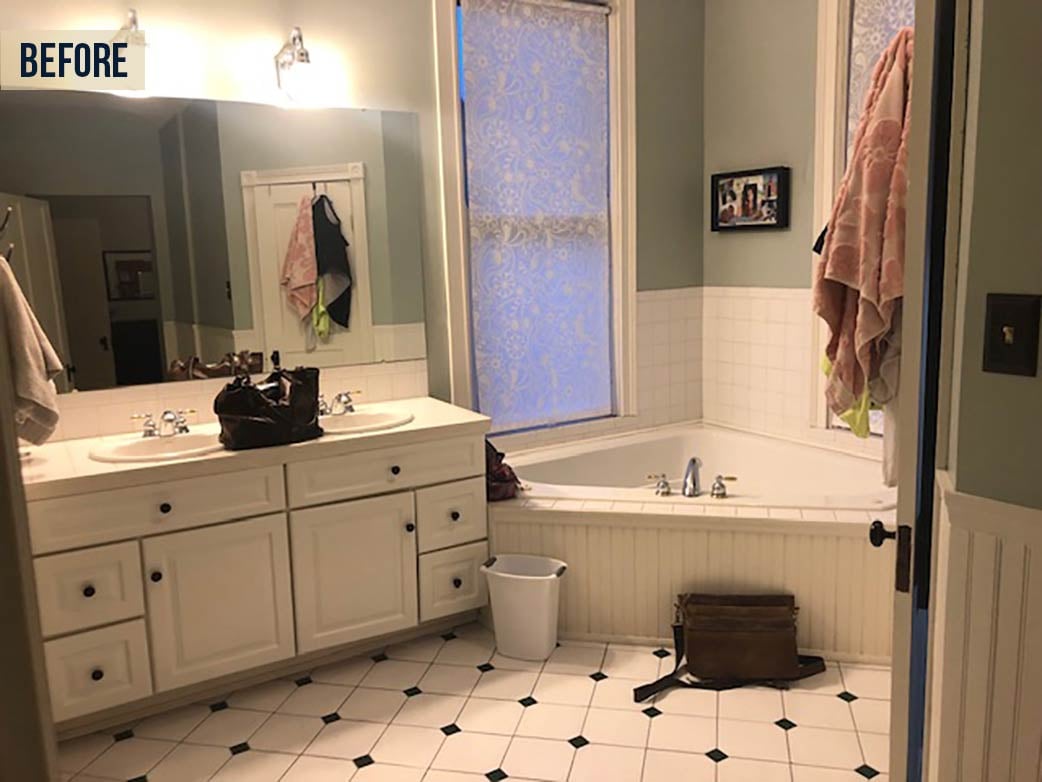 The master bathroom had previously been outfitted with a corner tub deck and a small shower enclosure in a secondary room. With mostly all the elements of the room being white, and there being no specific style to any of it, the bathroom hardly felt like part of the same house. The room did have a functioning layout, however, so the position of the plumbing could be reused. Everything else, however, needed to go. 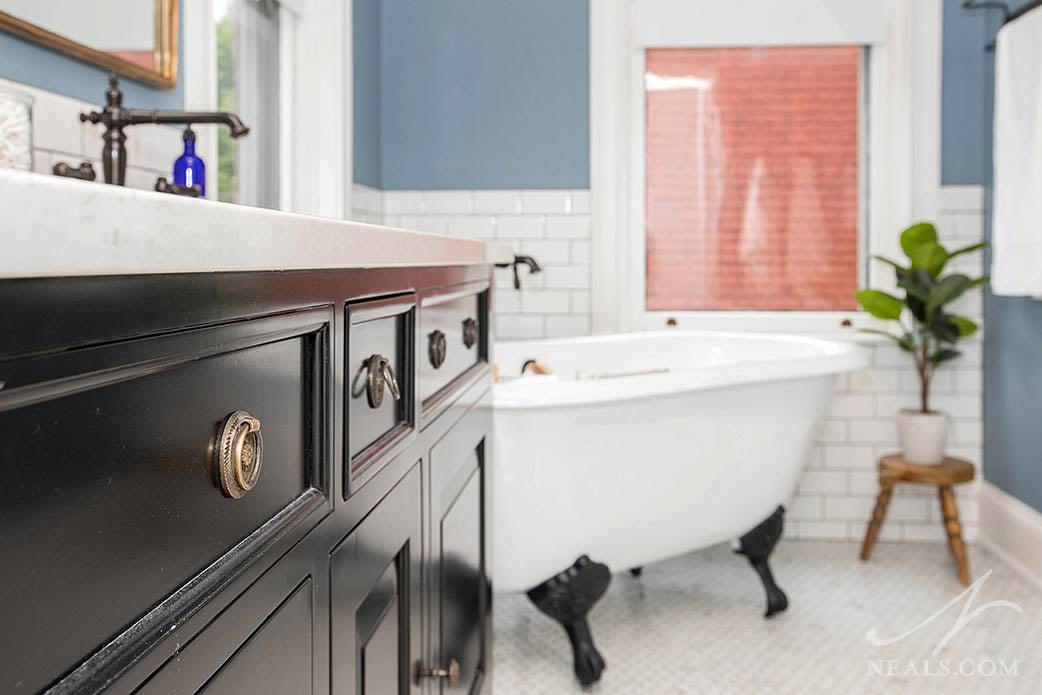 The new design can be described as "design details coming together". The foundation of the new master bathroom was a refreshed tile scheme. Classic, white subway tiles along with hexagon floor tiles both nod to turn-of-the-century design and form a neutral, minimalist base for the rest of the room. Next, a traditional clawfoot tub with a modern-looking white & black color scheme replaces the out-of-place corner tub, adding a sense of calm and luxury in the space. Further grounding the space is a new black vanity. The double sink cabinet is designed to look like a bureau which works better in the space than a typical cabinet vanity would. Paired with mirrors with gilded frames, the vanity creates a formal focal point that feels entirely suitable to the home's pedigree. 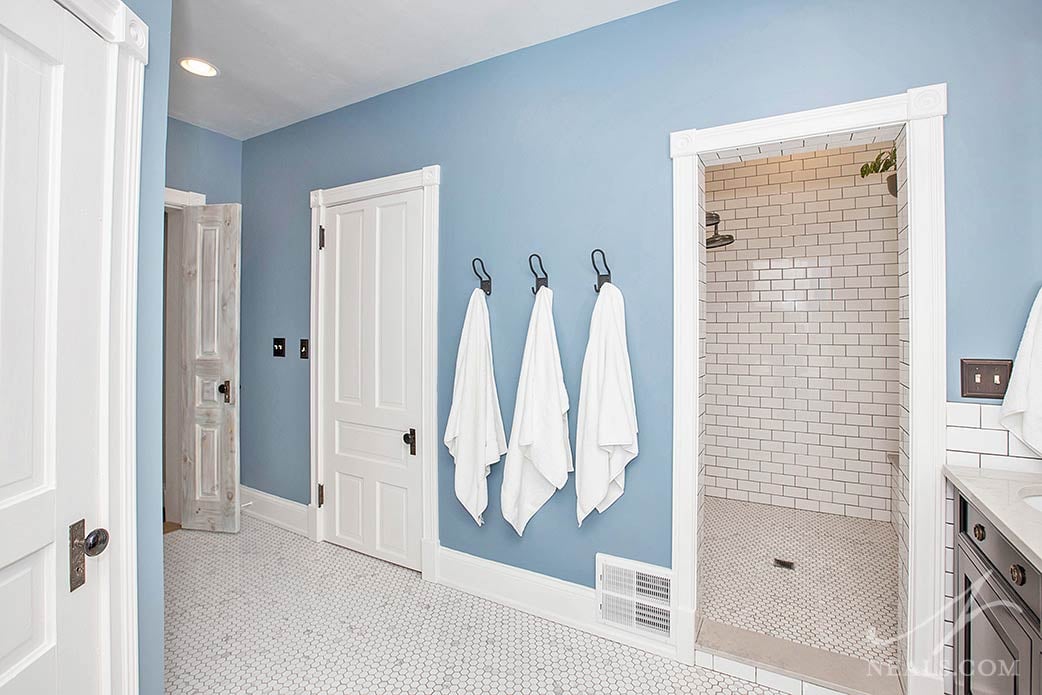 To amp up the luxury, the shower was fully reconsidered to create a new, roomier experience. The enclosure was removed from the adjacent space and the entire room was converted to become an open shower. The same tile scheme of subway tile and hexagon floor tiles was carried in and brought all the way up to the ceiling. A bench and niches for soap and bottles add practicality. This solution feels like a modern one, particularly with the lack of shower door, but the materials used, including the traditional style plumbing fixtures, carry the classic, historic design.

The upstairs attic bathroom for the kids posed a different challenge: an angled ceiling and a tight entry space. Here, the existing tub, a clawfoot tub with a similar design to the new one in the master, was kept since it worked so well in the space. The same type of tile treatment was brought in here as well, this time with a black accent tile in the floor to create interest in the small space and help differentiate the various surfaces (a universal design principle that's great for a kid's bathroom.) Rather than installing a vanity cabinet, a trough sink was installed that keeps the floor clear. This allows the narrow entry to feel more open and easier to use. 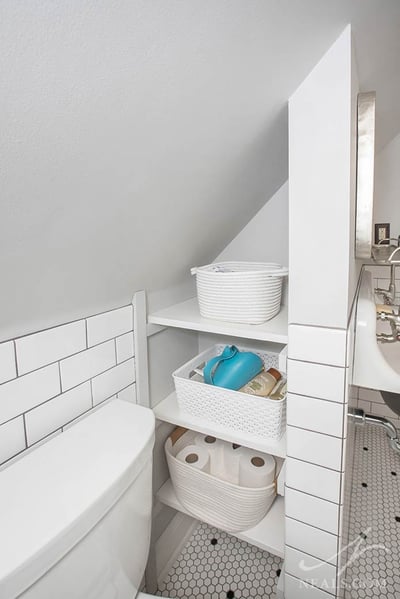 With very little space in this quirky bathroom, an existing closet that originally had doors that opened into the space was rotated and reworked as open shelving next to the commode. This new storage spot is easily accessible, but not obvious in the space, which works well with the homeowner's minimalist style.