The best word to describe this master bedroom suite remodel in Indian Hill is "dramatic". With bold design choices, stylish finishes, and a high level of attention to detail, this project, which includes the masterbath, bedroom and two walk-in closets, is anything but run-of-the-mill. With a mid-century modern style direction leading the project, the end result is a customized suite with all the polish of a luxury hotel along with all the well-considered comforts of home. 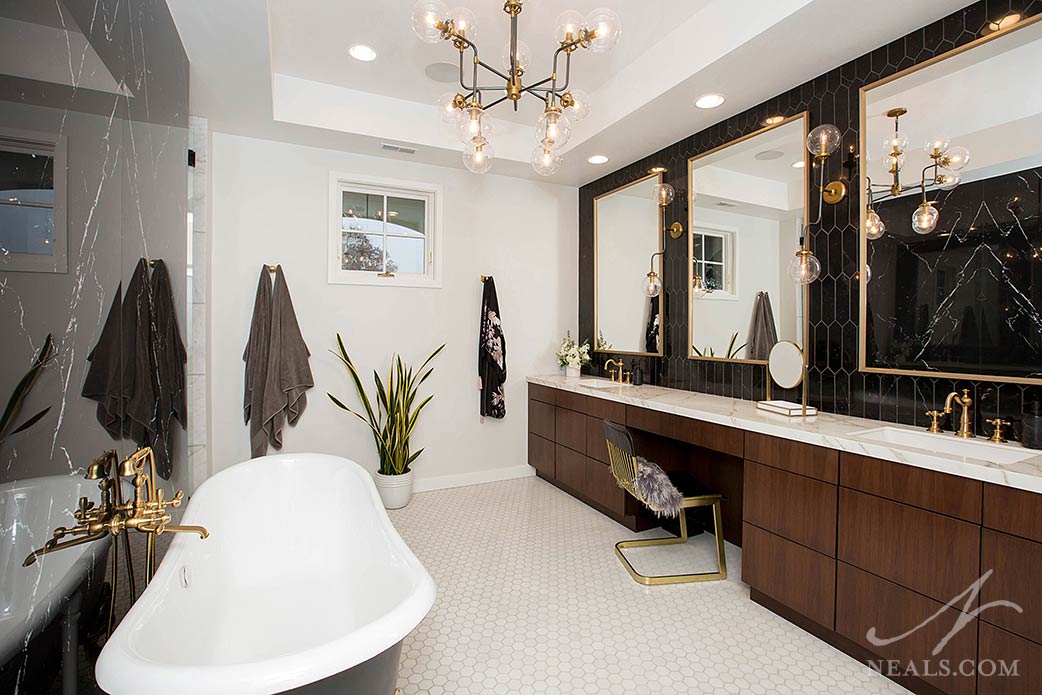 The core of this remodel is a sweeping change to the style and layout of the original master bathroom. The space, which was spacious, except that it had been arranged in such an odd manner that the square footage was lost to and over-sized tub deck and an awkward shower. The shower, which jutted into the room, looked like a giant bank tube. It wasn't helped by dated, boring tile and finishes. 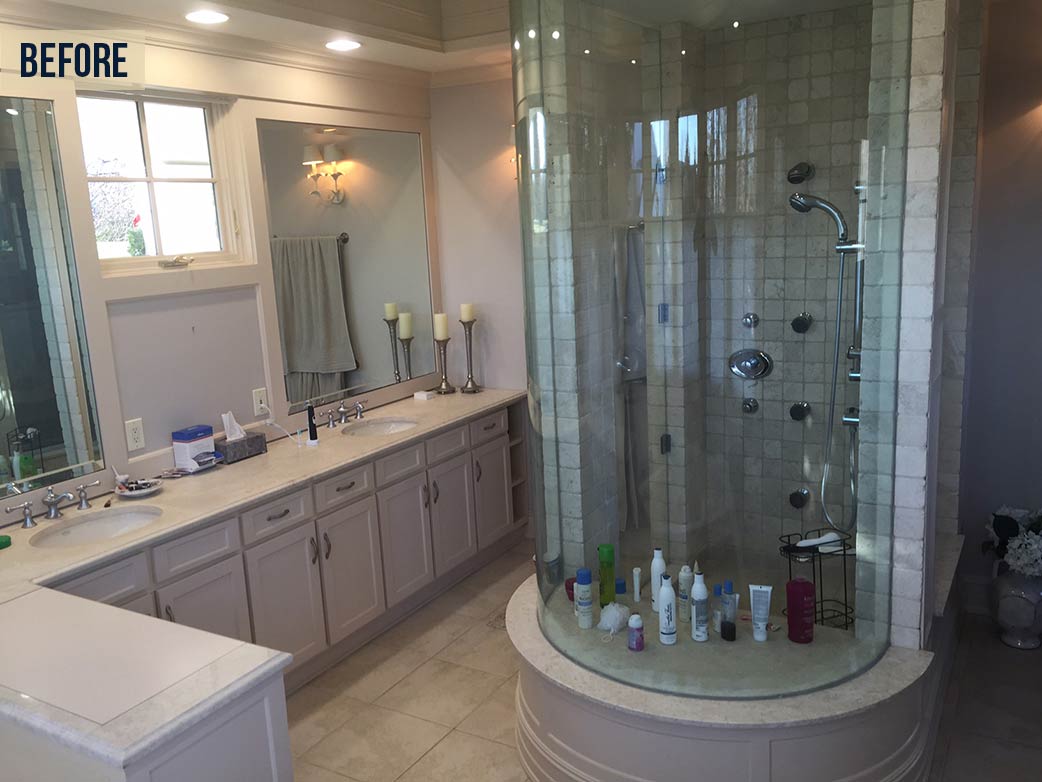 Once the old fixtures were removed, the open space created it's own set of challenges. A lack of ample wall space despite the room's large scale steered certain design decisions. With the homeowner's wish list for a clean, mid-century modern space with a tub, shower, and vanity, Neal's Designer Cyndi Kohler needed to get inventive. 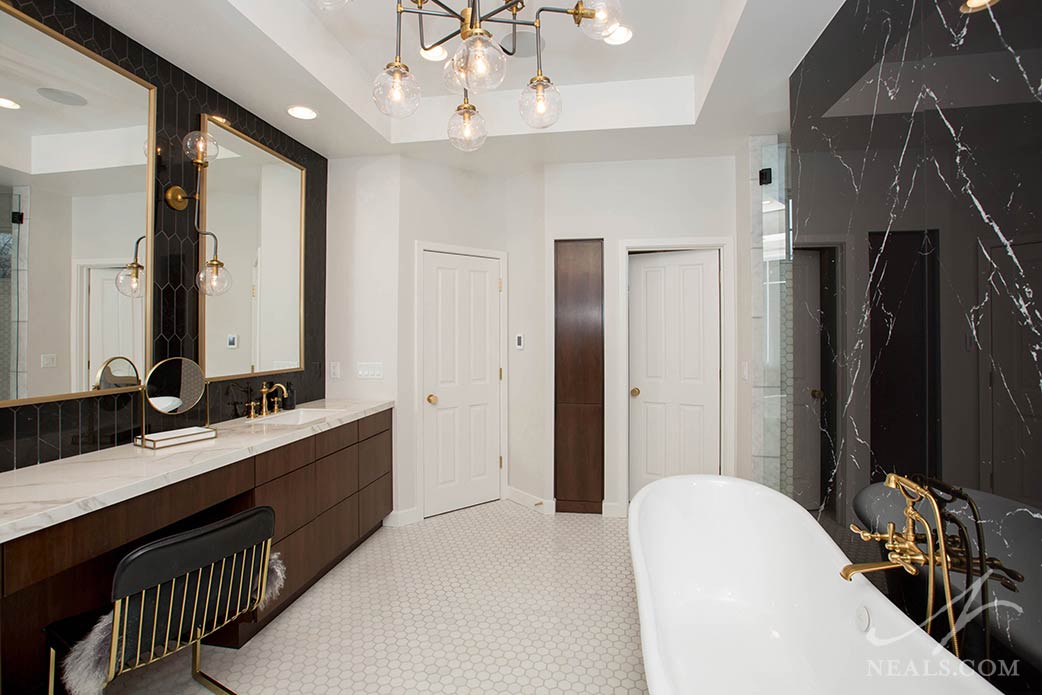 Using the single, unbroken flat wall for the vanity started the new layout off. In order to have enough space for the double vanity and makeup area, the bathroom's entry and commode room were reconfigured to provide the most length as possible along that wall. This left the entire remaining space for the tub and shower. As soon as the shower found a home on the window wall, the rest of the design fell into place. 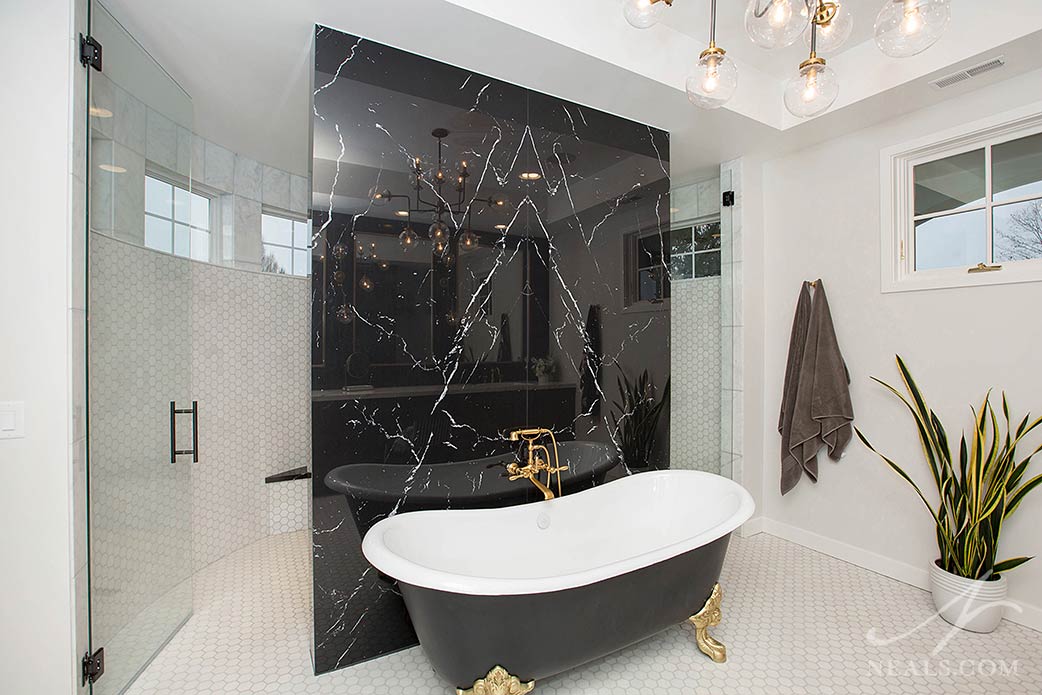 A stunning wall of black Neolith porcelain creates a dividing wall and provided a place for the soaker tub. It also provided a crucial element- a place to install the necessary plumbing. This layout created two dramatic elements within the room in one fell swoop: a spacious shower and an eye-catching focal point. 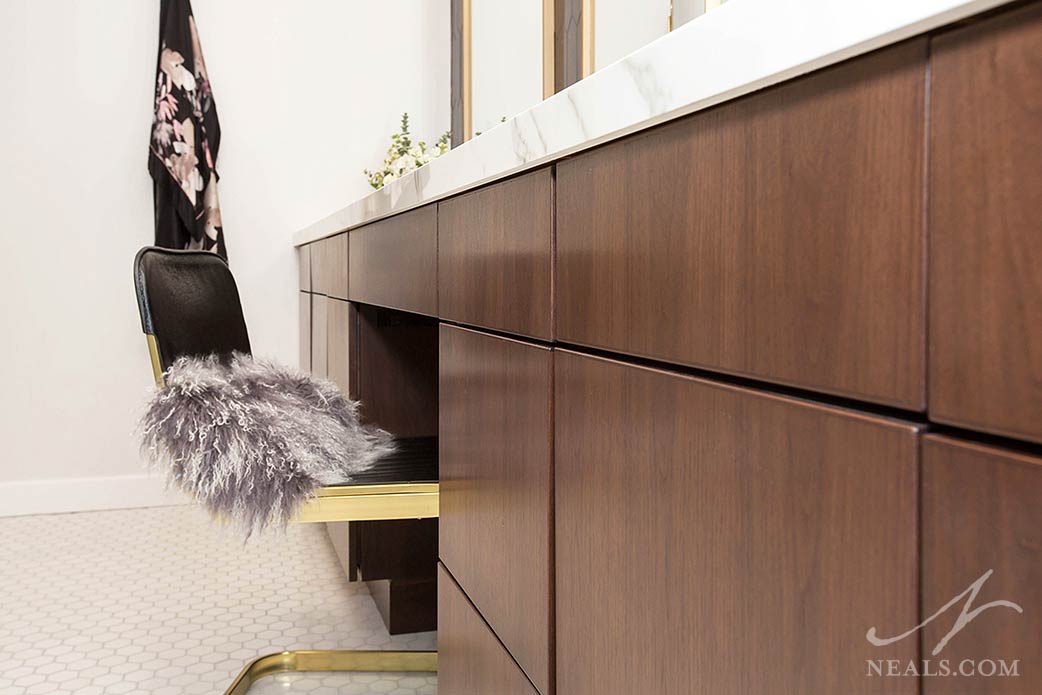 With the layout of the bathroom in place, material selections came in to finish the job. Driven by the homeowner's taste, the room's style flirts with mid-century modern choices and classic design choices in a way that feels as contemporary and fresh as it is bold. Sleek flat-front cabinetry with an invisible closing mechanism that eliminated the need for handles creates a retro aesthetic, particularly in the rich walnut wood grain finish. Combined with black tile and brass fixtures, there's a sense of inspiration from early 70's glam rock but rendered with polished sophistication. 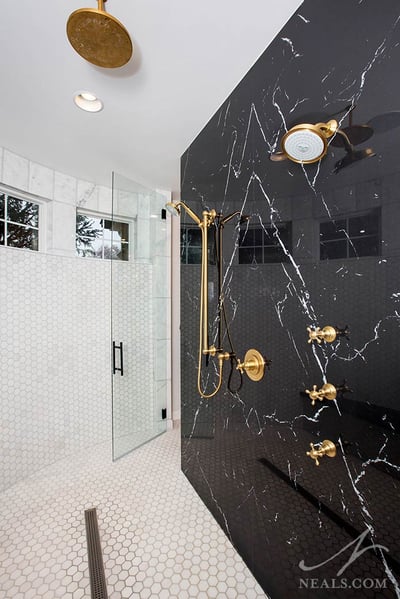 The center wall was created by using consecutive slabs of Neolith porcelain in a "book matched" mirror application. Then brushed brass fixtures were added. This combination of polished black and satin brass is just one of the many areas where the room plays with contrast. Small marble hexagon floor tiles, which transition up the walls of the shower for a seamless look, contrast the black slab as well as the black elongated hexagon tiles behind the vanity mirrors. 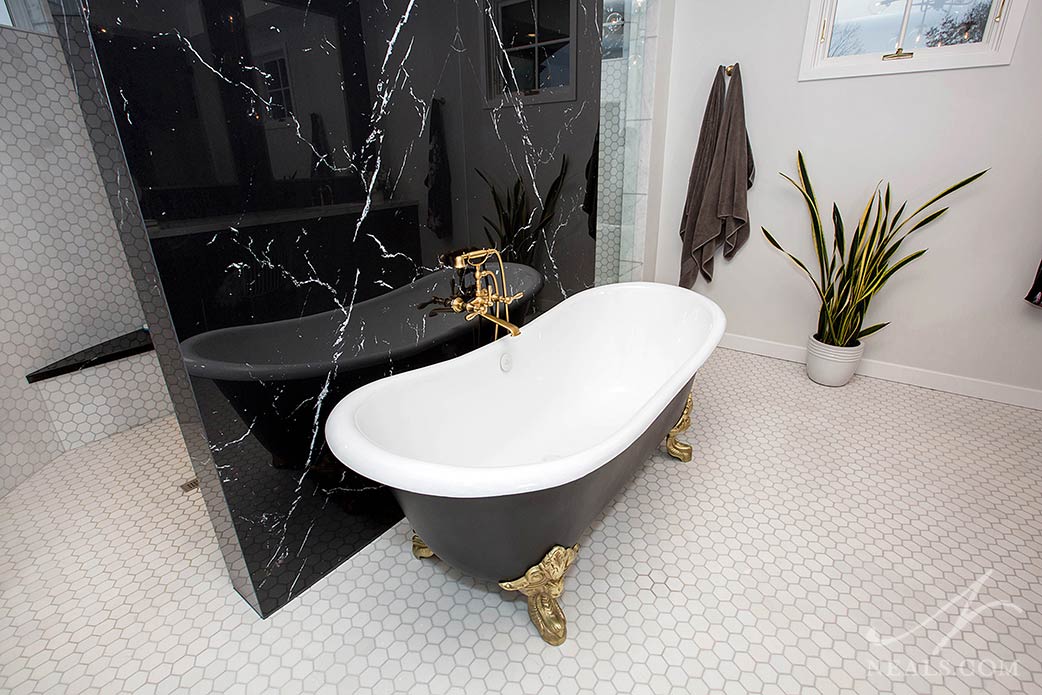 The clawfoot tub, a traditional element in the space, but fits within the overall design with a matte black outer finish. The tub feet originally came in a much brighter gold finish, so to match them with the brush brash fixtures used everywhere else, a custom finish was applied to create more cohesion. 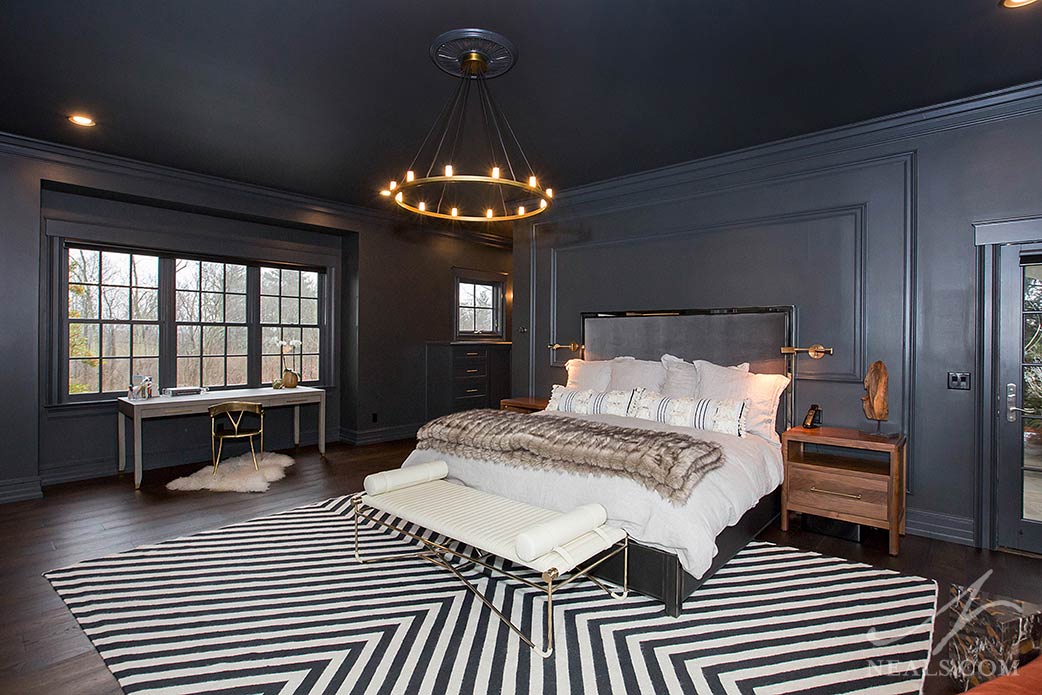 The drama extends in full force out from the bathroom into the master bedroom. Here, striking black paint coats the room for a moody, modern style in a traditionally-designed space. In fact, additional trim was added to the bedroom walls to further enhance the look of a grand traditional space. The black ceiling, combined again with brass lighting fixtures, visually minimizes the scale of the space in order to create a cozier effect.

The suite originally only had one walk-in closet, shared by the homeowners. With the remodel, a new two-story design and installation was done by California Closets that allowed the existing closet to become his. The directive was straightforward- make organization easy. Lighting and a mixture of storage styles gets the job done and the black finish ties this space into the bedroom. 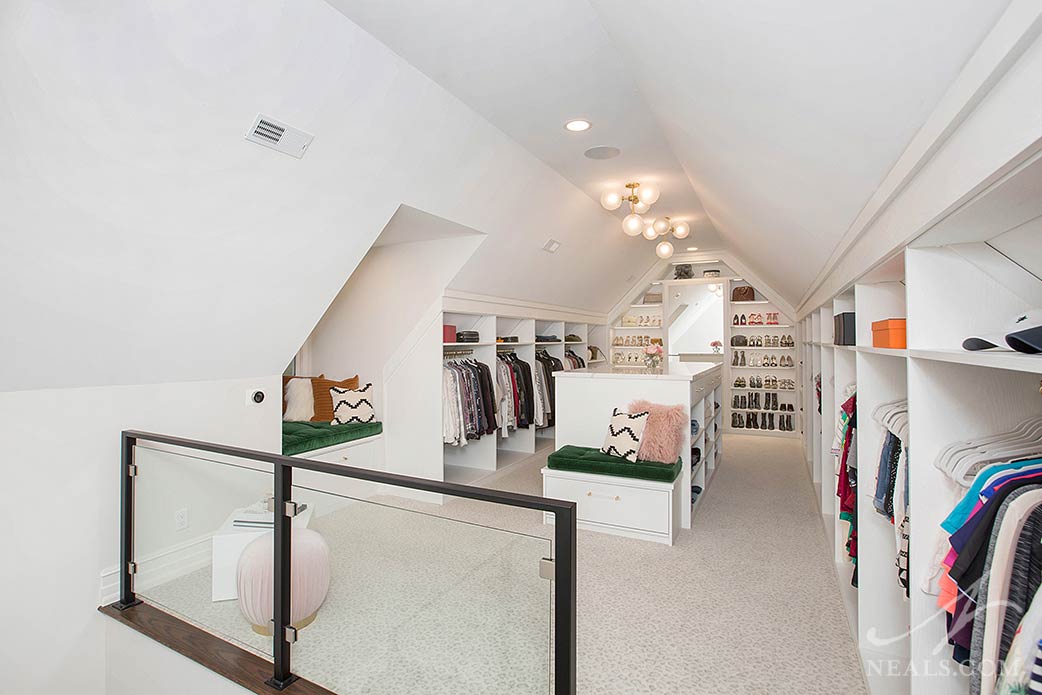 A larger project was the new closet for her. Not being able to add an addition or carve out space in the existing floor plan left her closet without a home. The solution came in the form of re-purposing the unfinished attic space above the existing closet and bedroom. Just tall enough to create a comfortable vaulted room, her new closet and dressing room was designed to feel like a private boutique. Open shelving allows the homeowner to keep her shoes, handbags and other accessories on display. A modern railing with metal and glass, subtle leopard print carpeting, and industrial-inspired lighting fixtures carries the glam vibe from the bathroom upstairs.