Updating a home with history can be one of the most interesting types of remodels to undertake. An important part of the project is to evaluate the existing portions of the home or space that are worth preserving, and those that are ripe for change. These considerations come down to a variety of factors, such as sentimental or aesthetic perspectives, which will create a framework for the new ideas. This kitchen remodel in Okeana is a wonderful example of combining old with new to create a space that works perfectly with the home's character. 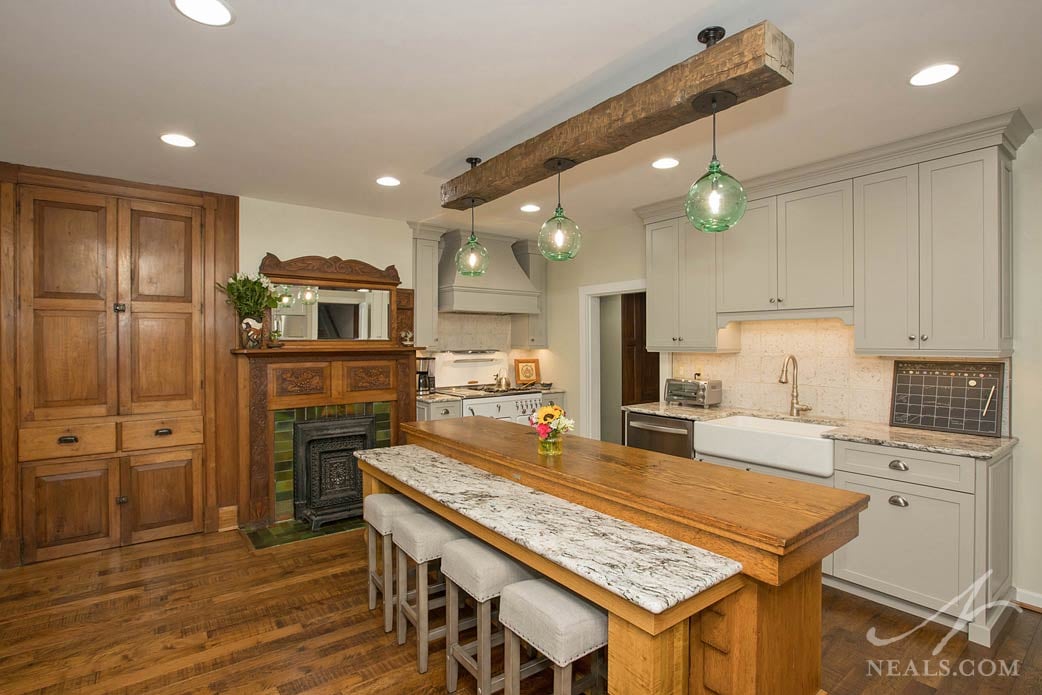 True to many older homes, the original kitchen in this farmhouse was a small space that was asked to pull double duty as both a kitchen and a breakfast room, as well as having four doors into the space (one of which went outside to a small porch.) The kitchen also featured original details- a built-in hutch and a fireplace with ornately carved woodwork, both of which tied into similar features preserved in other portions of the house, and were important elements to keep. The kitchen itself, however, was a mix of previously updated (and now outdated) cabinetry and furniture items filling in as cupboards. One of these items, however, was an antique piece the homeowners requested be kept- a meat shop counter from the homeowner's grandfather used as the kitchen's island. Altogether, the challenge presented to Neal's Designers Christina Temple and Bob Voigt was a special project that required several clever solutions. 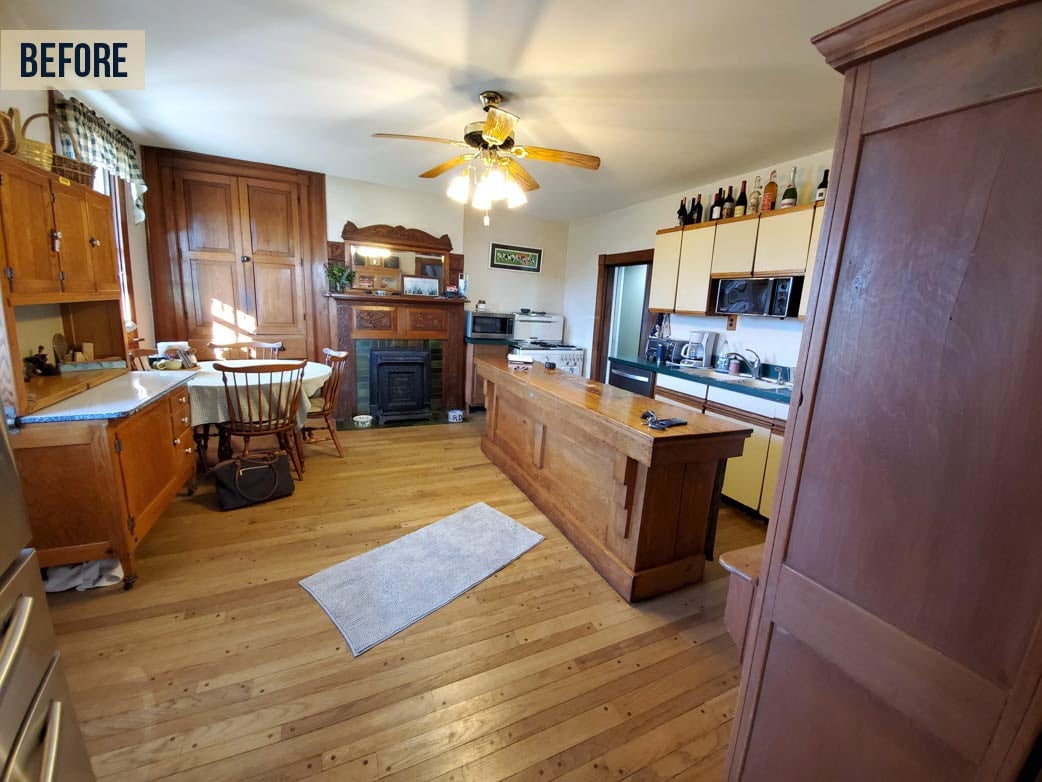 The scale and space available in the room were addressed by taking over the small back porch with a new breakfast room addition. This architectural change drastically opened up the kitchen's floor space and provided ample room for the kitchen table as well as ample natural light. During this process, the floor was also leveled, which is a typical need for many historic homes that have unevenly settled over time. The new sunroom-like breakfast room shows off the beautiful country view. French doors open out to a new porch that further extends the home's useable square footage. 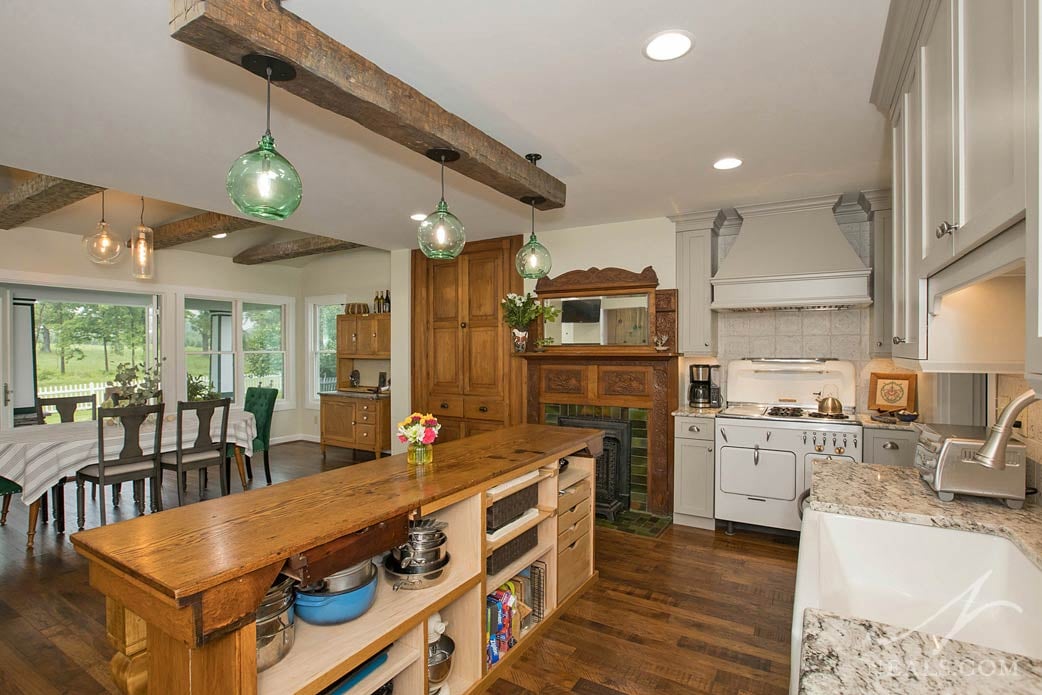 With more space to breathe, the kitchen end of the room was then designed to take better advantage of the three available walls. To add more workable area, the doorway into the dining room was shifted and a small recess was created to install the double oven and fridge. That was all accomplished in a manner that maintained the structural necessity of the wall. The three zones of the kitchen's working triangle each claim a wall, amplifying functionality by evenly distributing the specific tasks. A creamy green-toned gray was selected for the recessed panel cabinets that doesn't simply fade into the background but also doesn't compete against the rich wood tones of the existing elements that were kept in the space. 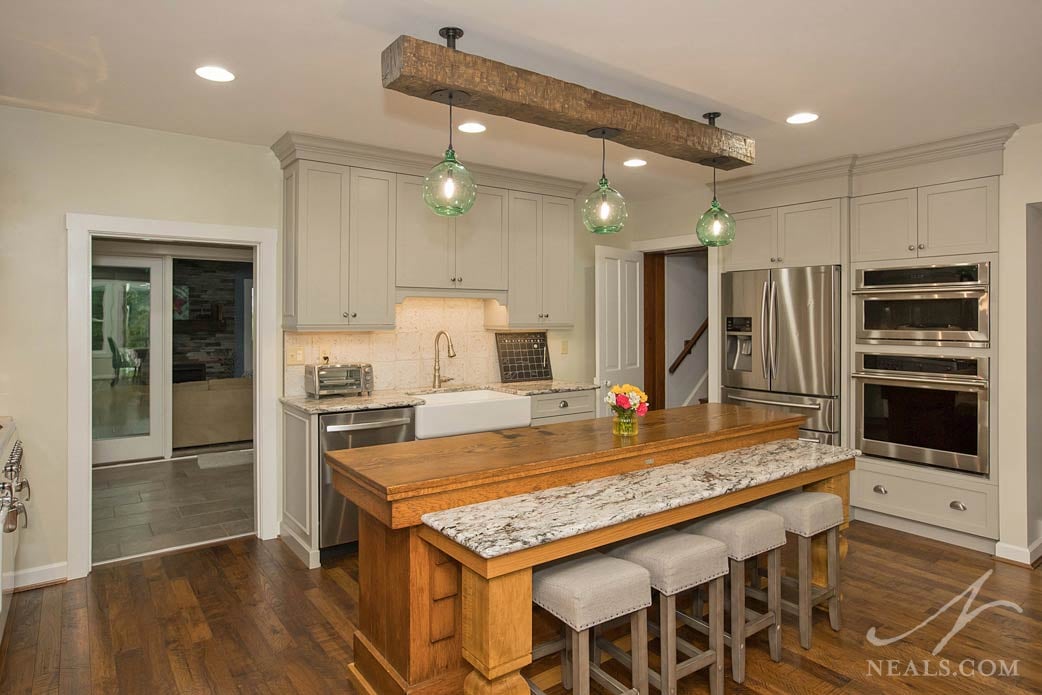 When first walking into the space, the eye is drawn to the wood elements that lead your view around the room to spot each unique piece in the space. Beams on the ceiling (rough-hewn logs that tie into the home's rustic setting) and a new floor with a reclaimed wood style were added to help prevent the original pieces from weighing the room down on one side. Handmade artisan glass pendants also add to the rustic charm of the new design. The green glass used over the island helps the undertones of green in the cabinetry stand out a bit more. 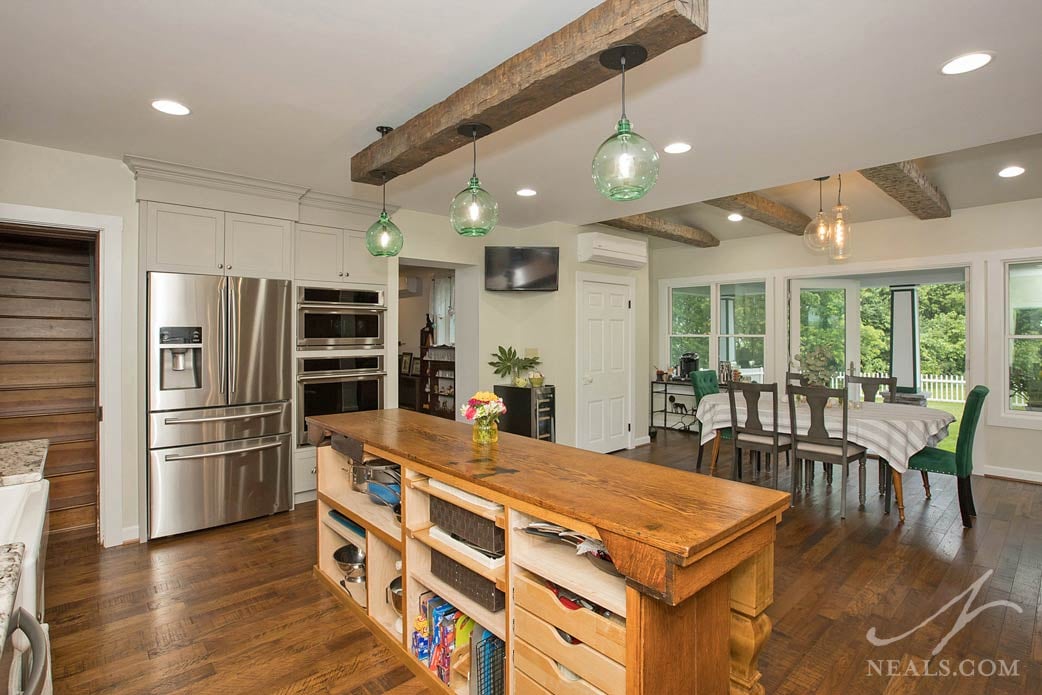 A major feature of the room, and of the remodel itself, was the restoration and redesign of the old meat counter island. While a great depth for its original purpose, the counter wasn't suitable for additional island seating, which was a feature that could be added with the floor space gained with the addition. Three changes were made to the counter to improve its function. A seating counter was added to the front with a chunky leg detail similar to those found on antique farmhouse tables. The counter matches that of the perimeter counter. The island was also raised slightly on a platform to bring it up to standard counter height. Finally, the shelving on the backside was rearranged and a set of drawers added to increase storage and improve the organization. The original wooden cash drawer (including a siding tray for coins) and the screws where the cash register was originally attached were left intact as special details. 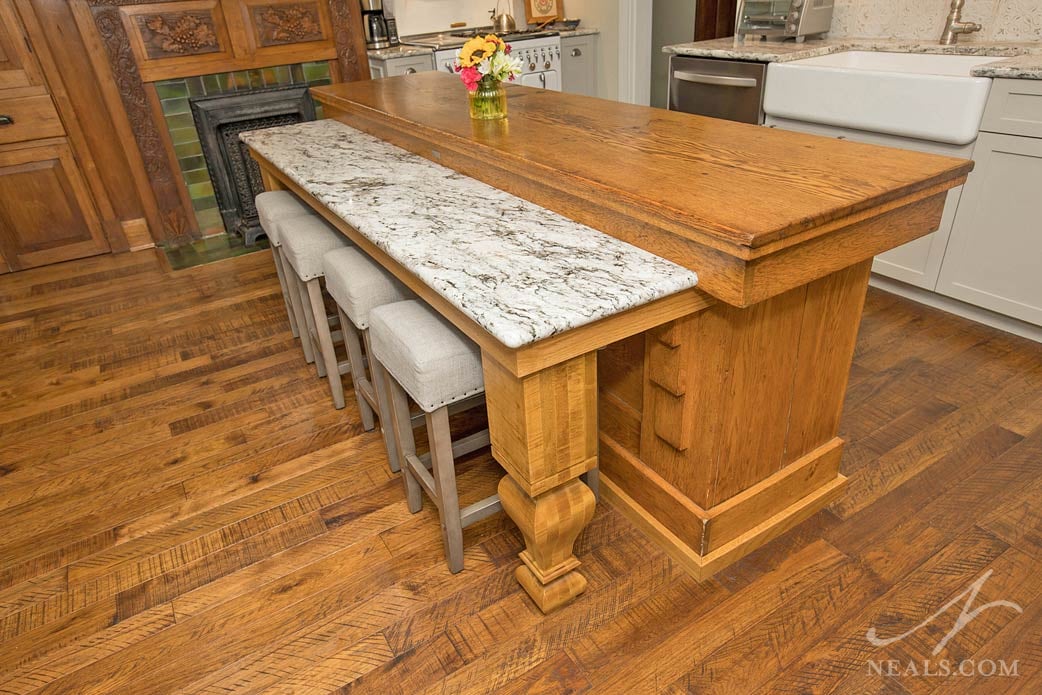 Not to be overlooked as another key component of this project, the new back porch is a homey space that offers a connection between the yard and home. A vintage craftsman-style column was selected to enhance the porch and tie into the style of the old farmhouse. 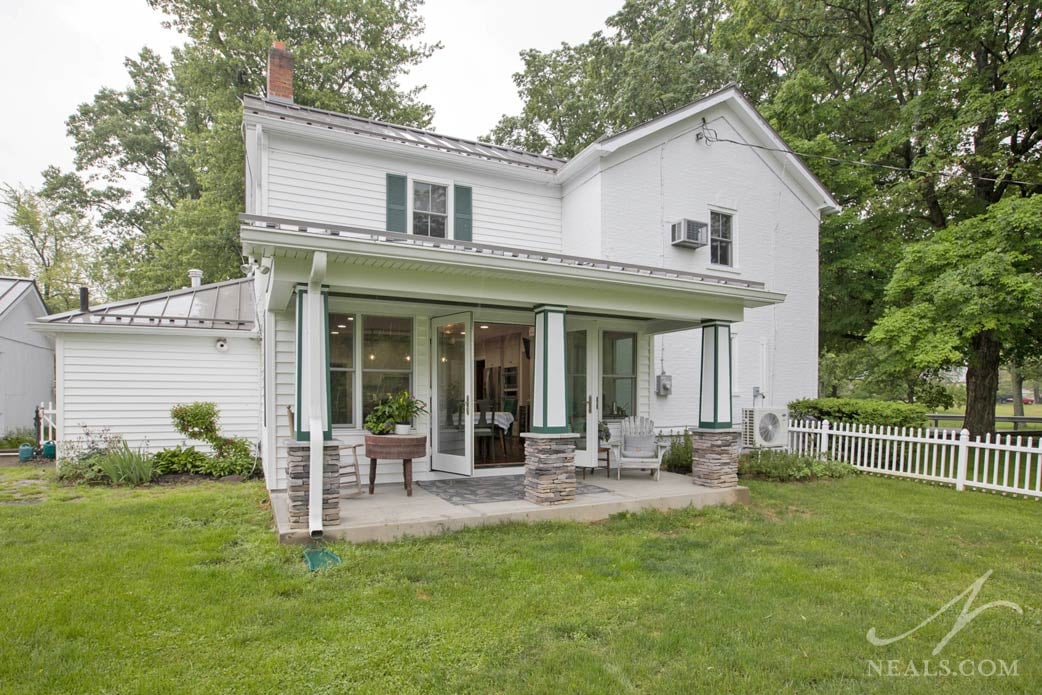 For more images of this project, view the slideshow.