A Master Bathroom Worth Sharing in Lebanon

Some homes will label a bathroom as a master simply due to its location. When we think of a master bathroom, however, we envision a sharable space, personalized to our needs, and suitable for private relaxation. For this Lebanon homeowner, their master bathroom was falling short. Neal’s Designer Christina Temple created a new design to help the master bathroom feel more spacious and usable for two. 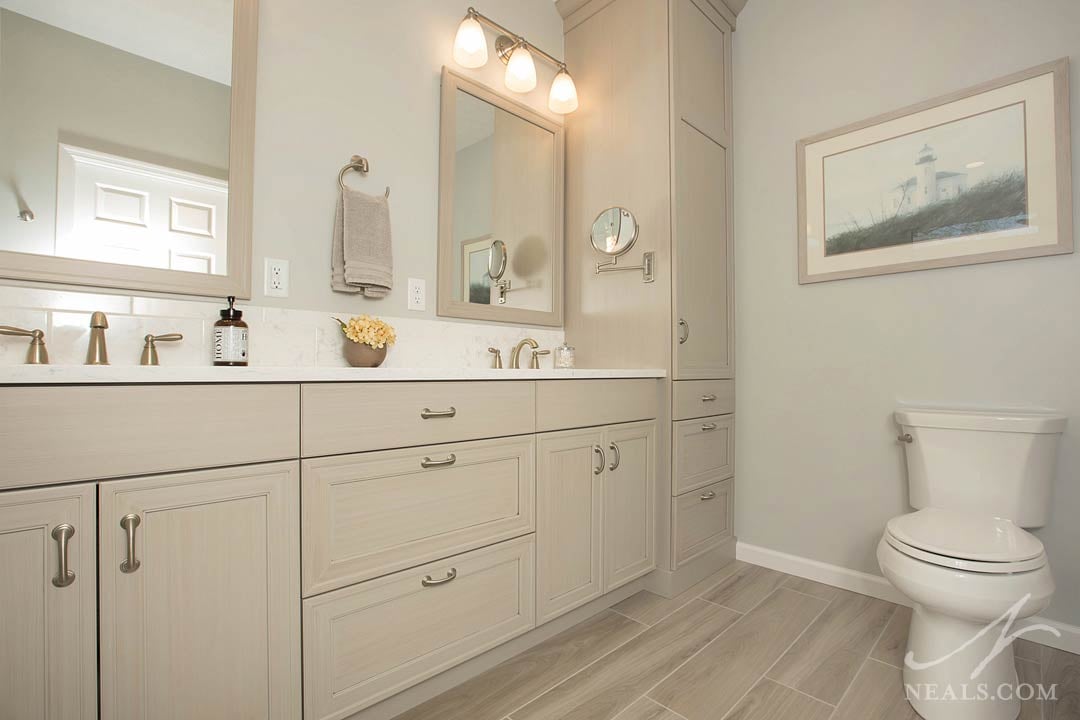 The existing space felt confined and despite two large windows over the tub, the room seemed dark due to the layout and dated cabinetry. With only a single sink and a tiny shower next to the commode, the room was not suited to sharing or comfort. 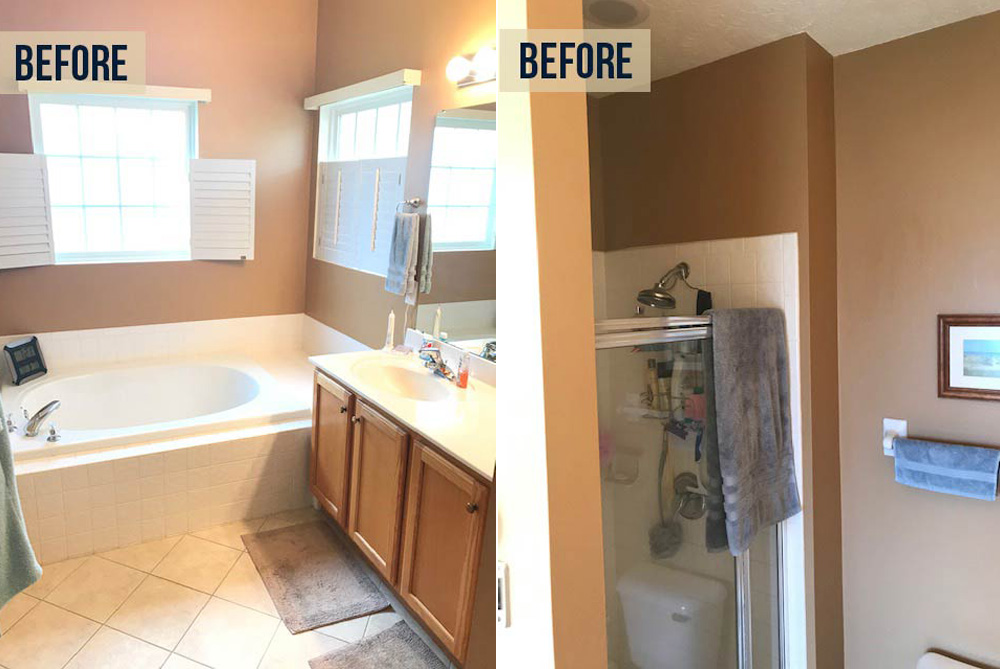 When it came time to redesign the space, Temple used the existing locations of the bathroom’s fixtures as guidelines for the improvements. While the original bath wasn’t serving the homeowner, it did point the way to locations for the new cabinetry and shower that made the most sense. Replacing the tub with the walk-in shower and adding a tall cabinet to the other end of the room helped balance the space. “The design gave a more centralized feel for the vanity, and I think that also made it feel more decorative.” 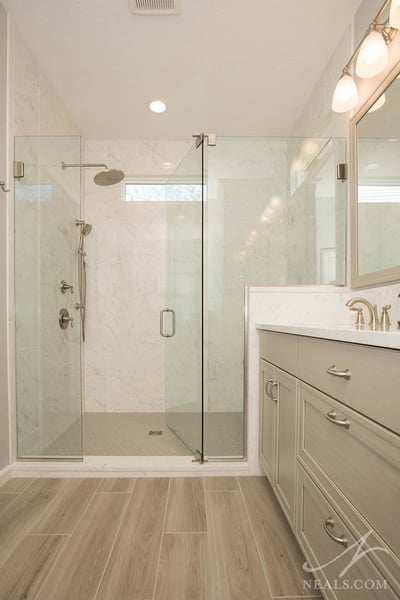 High on the homeowner’s wishlist was an improved shower. “The clients dreamed of a larger, brighter shower,” Temple explained. In the final design, the walk-in shower provides a key focal point and feature of the master bath.

Since any decision the homeowner made when it came to the windows in the bathroom would have an impact on both the interior and exterior, Temple took the time to detail her proposed chance. Using past project photos and new 3D renderings, she was able to show that a new transom window design would work on both the inside and the outside. The selling point? “[The windows] still allow natural lighting into the bathroom and also look nice within the new shower.” 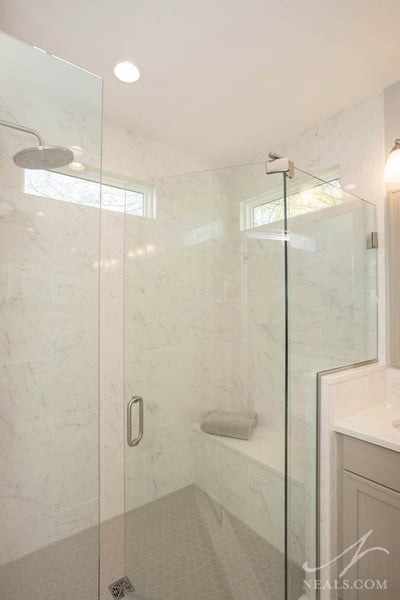 Temple welcomed the homeowner’s ideas. “They had a specific idea in mind for the tile.” Matching tile was used throughout the vanity and shower to make the room look larger and blend everything together. Temple then spent extra time on designing and drafting the plan for the trim around the vanity backsplash into the shower because it was a very specific transition. “I wanted to make sure the vision was clear.”

Temple’s attention to detail in her design paid off. The clarity of the plan allowed each successive field team to understand what was required and complete the project successfully. “It came together nicely with very little disruption,” said Project Manager Jantsen Dunn. 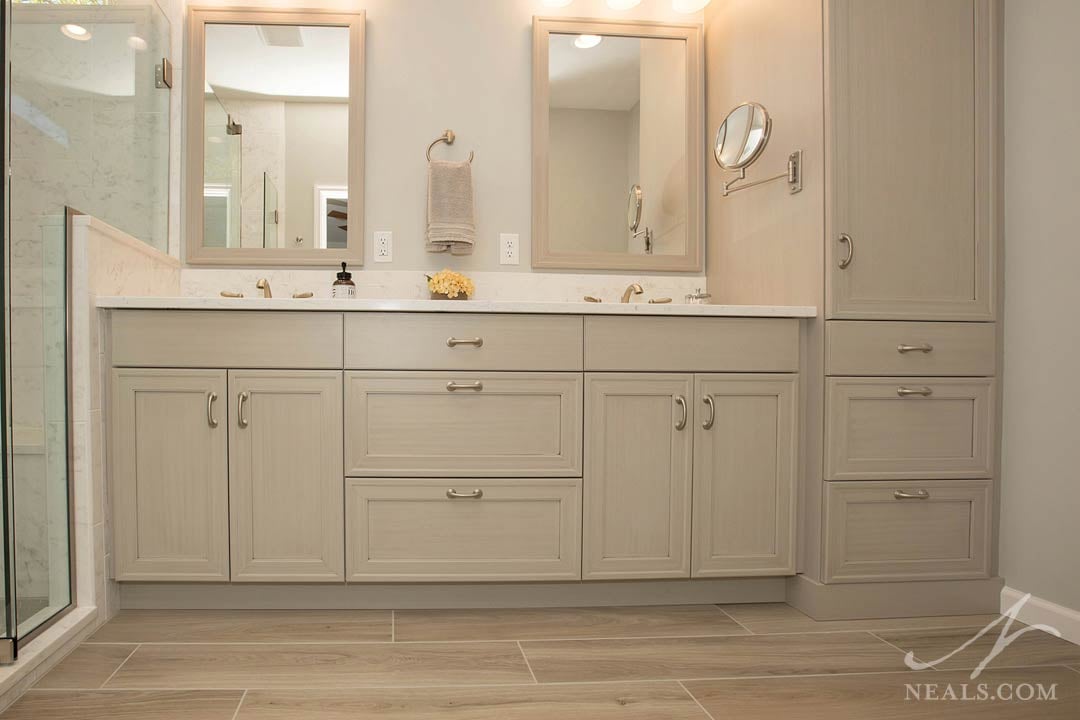 The little details make a huge impact on the function of the space for the homeowners. When it came time to complete the electrical work, Neal’s partner Corsmeier Electric offered an additional feature that the homeowner is thrilled to have gone for. The bathroom’s vent fan was connected to a timer at the switch that allowed the clients to turn the fan on when they need and not have to return later to turn it back off. Another detail is a hidden outlet inside the cabinetry. This extra attention to practicality helps maintain the clear and uncluttered look the bathroom design deserves. 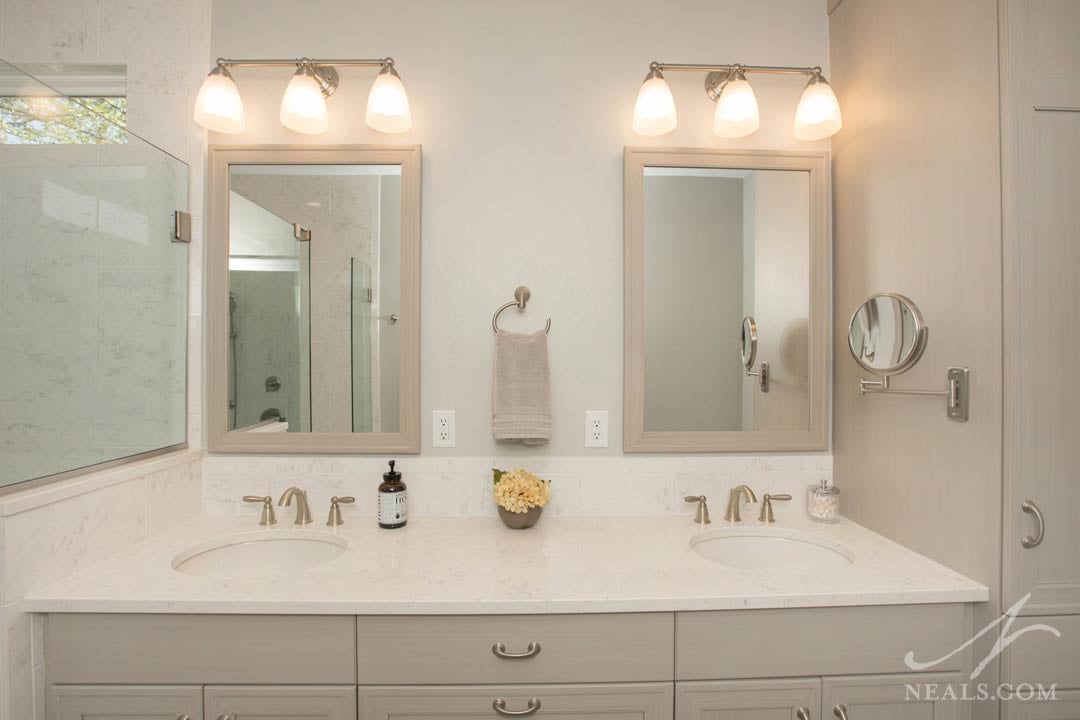 Temple’s favorite part is the serene and calming feel of the new space. “I think the marble look, while very trendy, is always a good, clean choice for a bathroom setting.” The combination of the tile with the warm gray cabinetry and brushed nickel hardware fills the room with exactly the type of soothing and welcoming vibes a master bathroom needs. 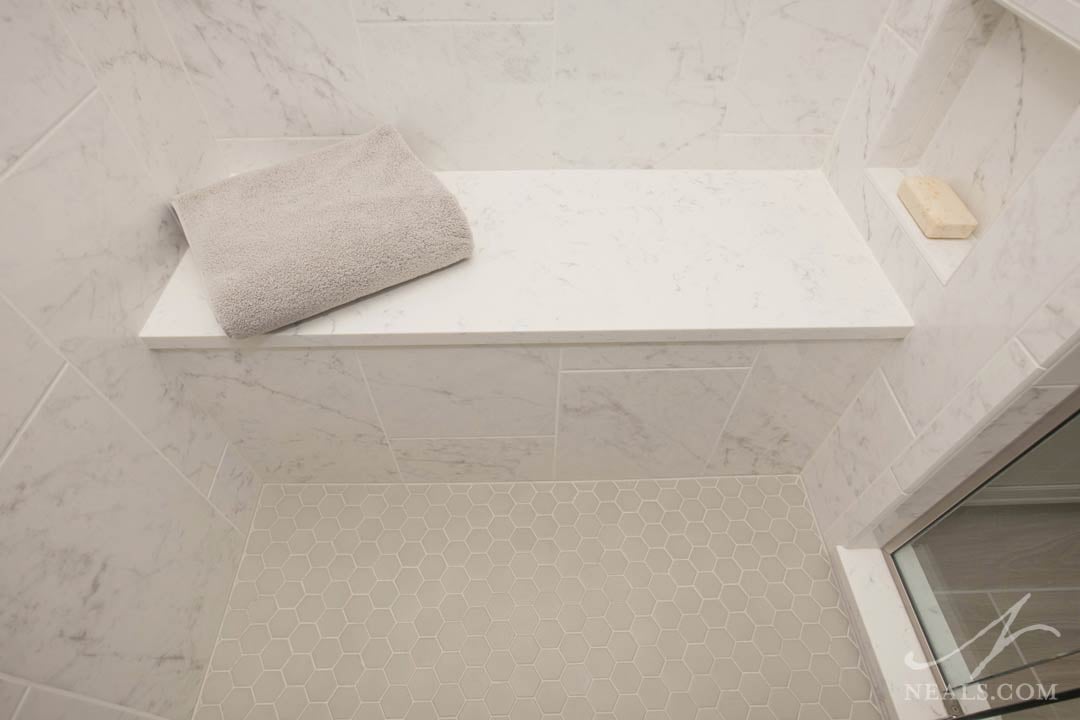 For Dunn, the shower stands out as a favorite feature in the new bathroom. He points out that the shower bench and a portion of the wall had heating installed to provide more comfort. “I imagine that would be awesome,” he stated. He also liked the use of the transom windows because of the perfect balance between natural light and the privacy they provide. Lead Carpenter Tom Skidmore backs him up. “I loved the way the walk-in shower turned out.” Skidmore went on to describe the whole bathroom. “Designed beautifully,” he said simply.

For more images from this project, check out the slideshow.

Ready to get started on creating the Cincinnati master bathroom of your dreams? We’re ready to speak with you.