Historic home kitchens, even those that were previously remodeled, are typically not made for entertaining and often don't provide much space for the avid home cook to spread out. Usually an afterthought, tucked into a corner and cut off from the main living space, kitchens in older homes can pose unique challenges for remodeling. First, the available space must be evaluated and the structural needs accounted for, then the new kitchen's style must be determined in terms of how or if it will match the home's existing architecture. In a densely populated area like Prospect Hill-OTR, Cincinnati, a home remodel also brings logistical challenges. This kitchen project was no exception, but the planning and effort paid off, resulting in a stunning transformation. 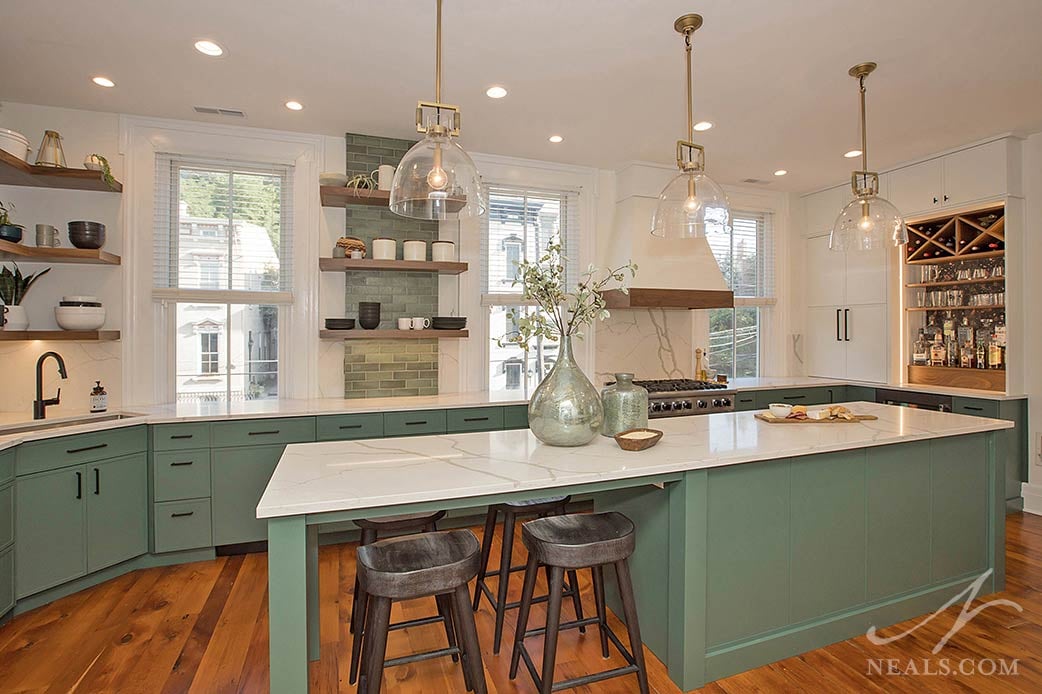 The kitchen is located on the second floor of a Prospect Hill/OTR historic home, which right from the start meant that the project would need to address what to do about the original windows (which could not be altered due to the local historic regulations), the plumbing and electrical lines to the floor above, and getting the new cabinetry and materials to the second floor. The existing kitchen, a dark and mundane traditional space, was situated into a small nook and cut off with a peninsula and columns. This not only left no room for spreading out and hosting, it was also a mismatch to homeowners' personal style. 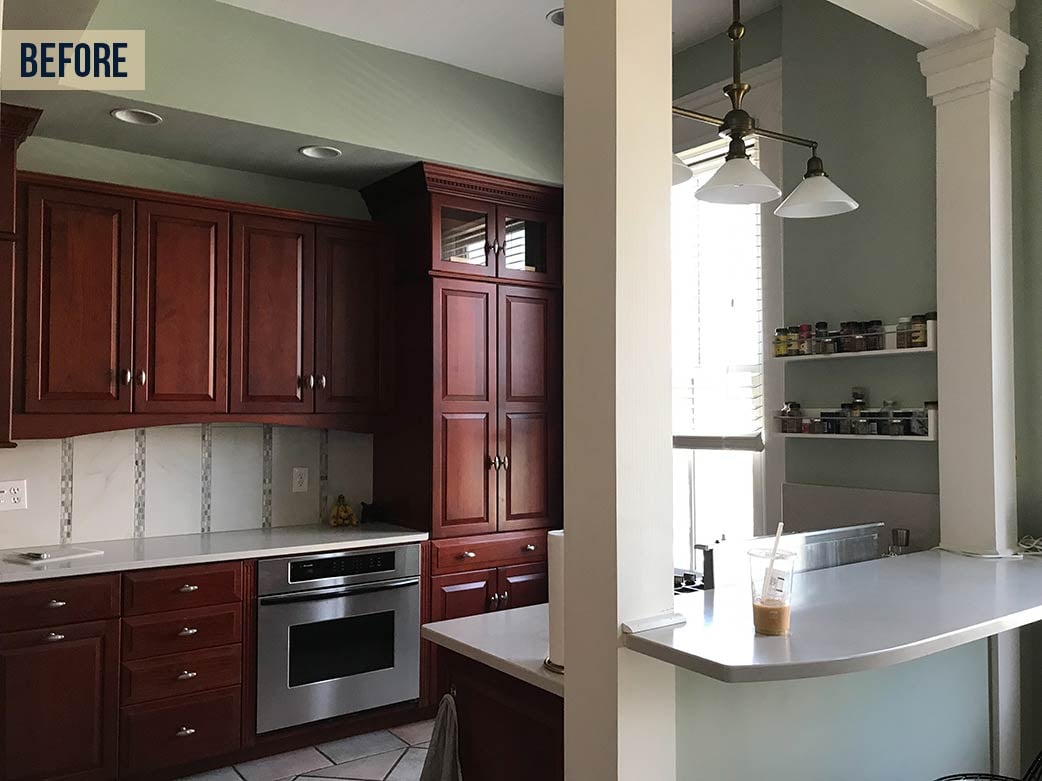 Taking a look at the entire front wall of the home, a new floor plan was created to spread the kitchen out across the full length of the wall and wrap around the ends to form a wide, U-shaped layout, grounded with a long central island. The three windows at the front of the home provide equally-spaced visual breaks that help create distinct zones for the kitchen's various tasks. Black panels were added at each window behind the cabinetry to conceal the overlap on the outside. The new kitchen provides large amounts of uninterrupted counterspace that lends itself well to entertaining and food prep. The homeowner, owner of The Bagelry in Over-the-Rhine, is an avid cook who wanted a kitchen he could enjoy using without feeling crowded. The walls at either end of the kitchen house tall cabinets, leaving the front wall open and airy. 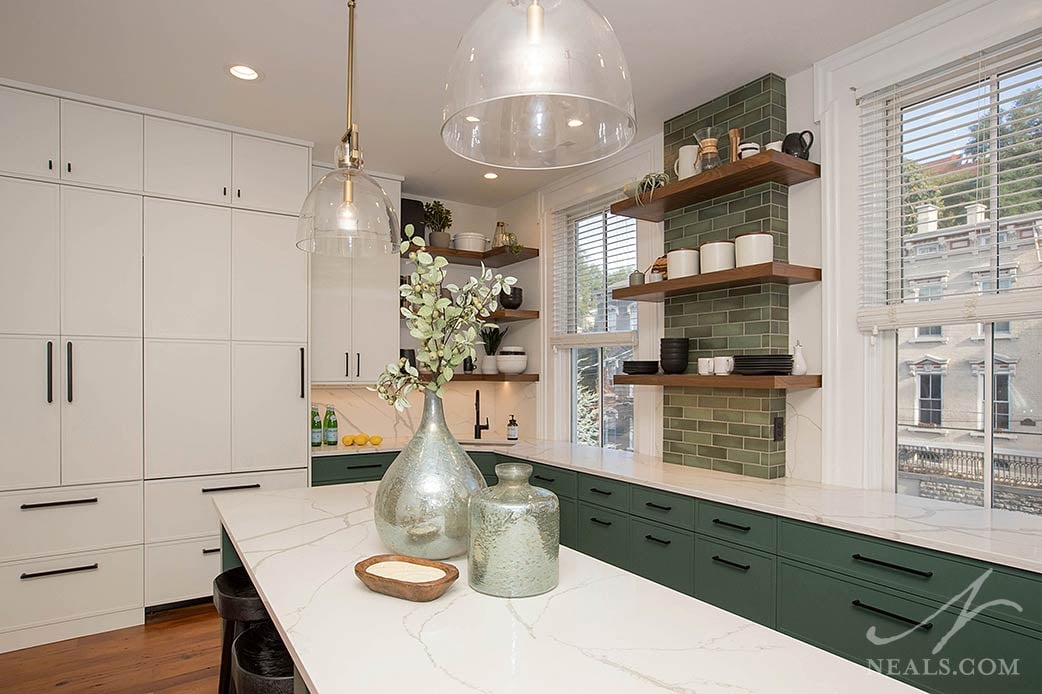 The kitchen's style is on the contemporary end of transitional style, marrying a sleek modern look with transitional details like recessed cabinet doors, a paneled look on the island, and a hardwood floor, to blend the space in with the surrounding home. The new kitchen now includes an existing fireplace that was updated with a new tile hearth to pull it into the kitchen's design, helping to create a seamless look between old and new. 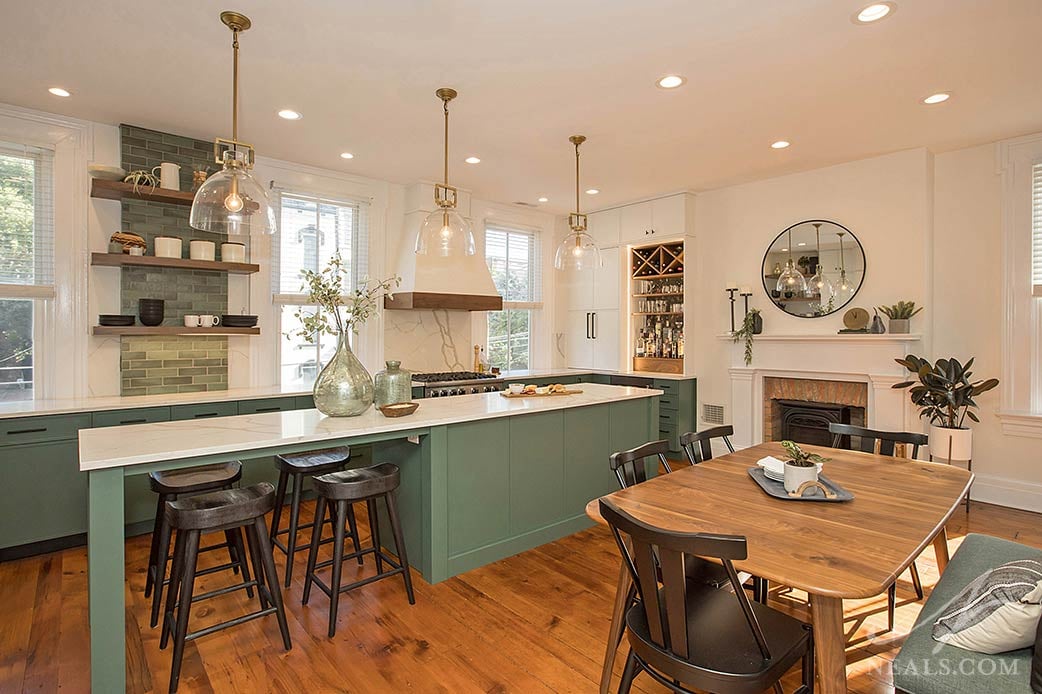 Taking a cue from current trends, the lower cabinets of the kitchen along with the island are painted green, which feels both classic and contemporary, especially in the way it contrasts with the warm wood tones throughout the space. To keep the space bright, white cabinets and a white countertop (quartz with a marble look) finish the space and help make the room feel taller. The appliances and tall cabinets had to be craned in from the street rather than brought in through the home due to a tight turn. The three large pendant lights over the island use glass shades so that they don't conceal the view or create any visual weight from above. 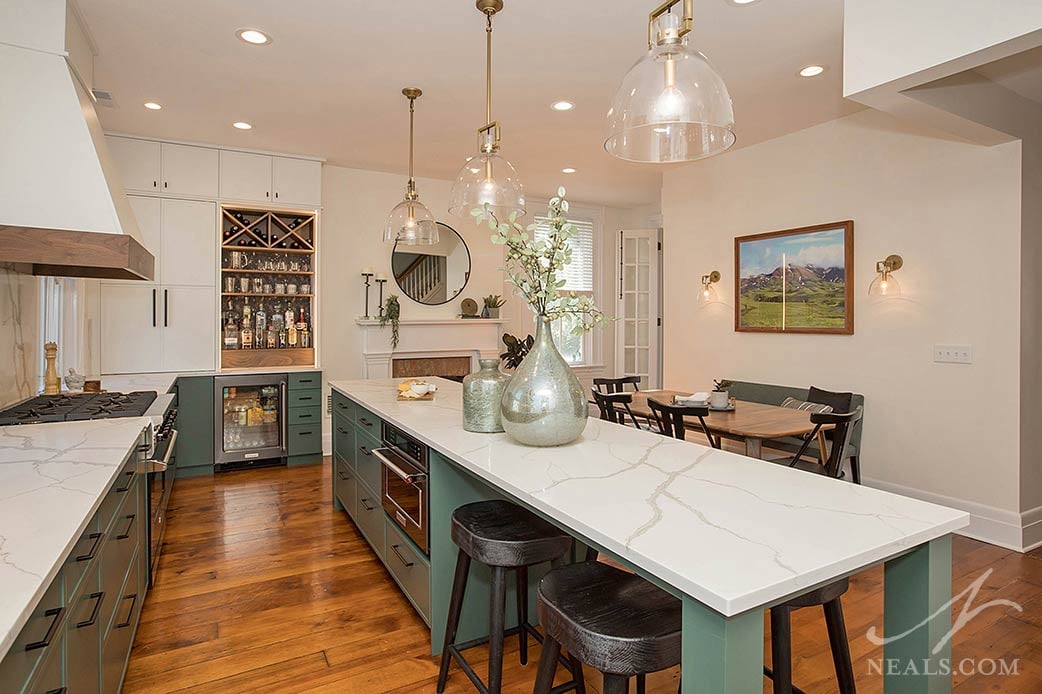 The kitchen is loaded with lots of special details and considerations. A bumped-out section of wall between two of the front windows contained electrical lines that could not be moved. Green artisan tile was added to the wall along with floating wood shelving, turning what could have been an awkward eyesore into a focal point that creates interest and additional color, along with useful storage. A bar was created by pairing an under-counter beverage fridge with open wood shelving for drinks and glassware, further helping the new kitchen fulfill it's purpose as an entertainment space.

For more images from this kitchen remodeling project, including details, view the slideshow. 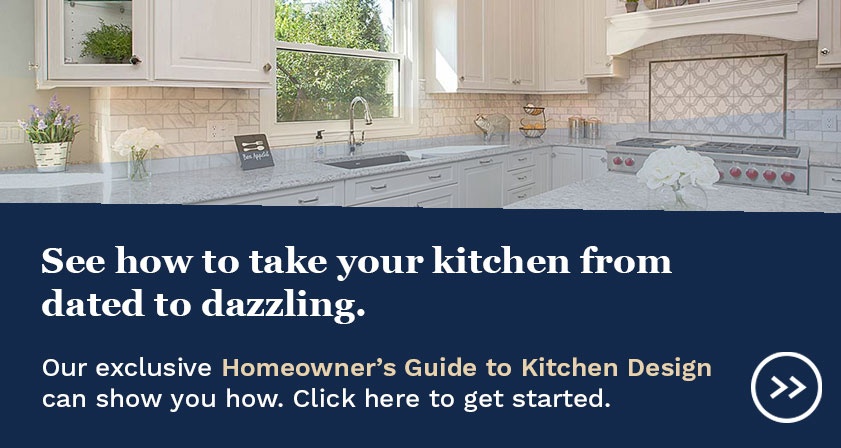